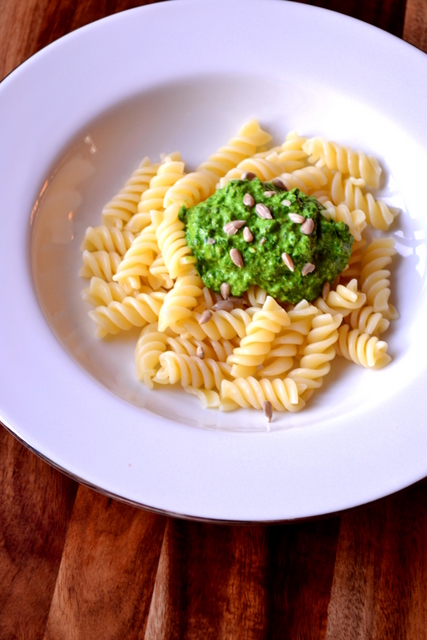 If you’ve been cycling or walking through forest recently you may have picked up an often quite strong scent of garlic in the air. In season between late winter and spring, wild garlic (also, ramsons or bear’s garlic) grows in prodigious quantity in damp, deciduous woodland. It can be identified not only by its garlic-like scent, but also by its distinctive lush green leaves and pretty white petals. If you can get your hands on some, and I’d be surprised if there isn’t any nearby, then it has many culinary applications, chief among which is Wild Garlic Pesto.

END_OF_DOCUMENT_TOKEN_TO_BE_REPLACED You wouldn’t think it from the limited selection available at supermarkets, but pesto is an incredibly versatile sauce. A quick internet search reveals just how much variety there is out there, beyond the traditional Genoese basil flavour. My advice is to go with the seasons when it comes to pesto – basil isn’t always the best choice. For instance, there’s a definite autumnal feel about this Spinach, Feta and Walnut Pesto – very comforting indeed.

END_OF_DOCUMENT_TOKEN_TO_BE_REPLACED

Invariably simple to produce and devastatingly delicious, pesto is almost certainly the last word in quick, easy and frugal meals. Of course, it has applications outside the world of fusilli (basil pesto is, for instance, a rather delicious addition to soup), but that’s where its heart shall forever rest. For example, take this roasted red pepper pesto – in order for one’s pasta to obtain a satisfactory demise, all one need do is roast some fruit along with a little garlic, blitz it up with a few added extras and yell “Bob’s my uncle” at the top of one’s lungs. You’ll be glad to hear that the last step is not, and hopefully never will be, obligatory.

END_OF_DOCUMENT_TOKEN_TO_BE_REPLACED

Posting two similar recipes in quick succession isn’t something that I’d usually indulge in, but time has been short recently and pizzas are awfully quick and simple to make; particularly when using pre-prepared dough. While on the subject of dough, a couple of you weren’t sure how the quality of it would be affected by being frozen for a few days. It seems that all fears of any dough-damage were entirely misplaced, as it produced a base of exactly the same quality. However, one must ensure that the dough has completely thawed before use. Indeed, I would suggest that one ought really to remove it from any chilled environment overnight before using it for pizza. Those of you who suggested that such an act would degrade the dough ought to feel ashamed. I wasn’t aware that faith in my instruction had waned quite that much!

END_OF_DOCUMENT_TOKEN_TO_BE_REPLACED

I like to think that most of the recipes and photos posted to this blog have a certain rustic charm to them. Of course, there is nothing wrong with this, but it comes rather too easily to me. Occasionally one must challenge oneself to break free of their expected roles – this is one of my infrequent flutters into the realm of ponce. Actually, let’s face it, I endeavour to spend most of my time as a pretentious so-and-so; this is my attempt to have my food join me.

I’m not entirely sure from where the idea to use fried bread came, but I remember liking it immediately. My capacity for picturing how a plate of food will look before it has actually reached that stage informed me that this would look really rather pleasing. Happily, for those around me, my cranium hasn’t yet swelled to the size at which self-doubt becomes impossible. As such, I wasn’t entirely sure that my aims would be accomplished, having never seen or heard of a recipe for such a feat. However, it happened to turn out perfectly, which is lucky since I tend to get rather frustrated when something goes awry – particularly when it comes to food preparation.

Whenever red lentils happen to pass my lips I get an urge to accompany them with the flavour of a citrus fruit, particularly that found in the common lemon. There is something about the two, which I find impossible to pinpoint, that goes incredibly well – they simply must be eaten together. So, instead of adding the lemon zest to the burger itself I mixed it with a little Greek yoghurt, thus succeeding in not disguising its taste even a little. The addition of the rocket pesto, posted only a few days ago, really set the dish of nicely, giving the burger the little kick it needed. Vegans may steer clear of the yoghurt and pesto! In fact, one may make only the lentil burgers if one so wishes.

1. Pop the lentils onto boil in a few inches of water, cook for 10 minutes until tender. To make the fried bread, which must cooled before eating, cut the crusts off your slices of bread, roll them out to the thickness of about 2-3mm, cut into circles using a rösti ring and gently fry in plenty of olive oil until golden brown. Save the left-over bread for bread crumbs.

2. When the lentils are tender, transfer them to a large mixing bowl, allow to cool for a few minutes. Add the garlic, chilli, cumin, coriander, salt, pepper and bread crumbs. Stir thoroughly before incorporating the egg. Shape the mixture into 7 or 8 little burgers using plain flour to keep them from sticking. Pop them in the fridge for 10 minutes – it is often best to make these in advance.

3. Fry each lentil burger in a little olive oil until golden brown on each side. To make the citrus yoghurt simply mix the yoghurt with the lemon zest. Plate up the burger with one piece of fried bread at the bottom, then a dollop of the yoghurt, then the burger itself, then a dollop of rocket pesto, then another piece of fried bread. Serve with optional potato wedges and handful of rocket leaves.

Cost: This dish really and truly makes for an incredible meal – it is so healthy and filling. Without the optional extras these burgers cost around £1.30 to make, adding the wedges and rocket adds only a little to this total. In my opinion this is ridiculously good since they would easily provide enough lunch for 7-8 people. Talk about pretentious frugality.