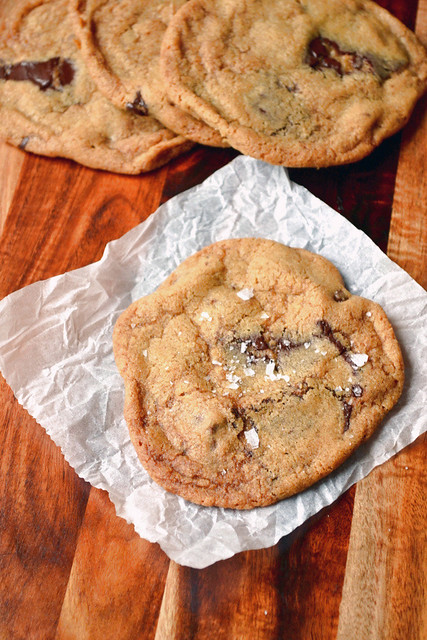 Cookies come but once a year in our house. They’re oh-so-wrong, yet oh-so-right, in the sense that they’re worse for you than pretty much anything, but consequently also taste better. Of course, scarcity demands indulgence and my Salted Chocolate Chunk Cookies are the culinary manifestation of such necessity.

END_OF_DOCUMENT_TOKEN_TO_BE_REPLACED

Whenever I see that another blogger has made cookies using oats I get a jealous impulse to make some of my own. Baking is, in my opinion, the true calling for an oat – porridge just doesn’t do it for me. The texture of oats seems to impart exactly what I look for in a cookie; a homeliness that is hard to find in the more flashy cookies. In my original oat and raisin cookie recipe I remarked that chocolate chip cookies are all well and good, but if I’m being honest, oats are where it’s at! However, I need to be more careful since using such a grammatically troubled phrase may well give me a nosebleed.

END_OF_DOCUMENT_TOKEN_TO_BE_REPLACED

Cookies are one of those American inventions that even the most staunchly British chap feels utterly compelled to bake from time to time. However, it’s nice to vary things a little; I’ve never baked the same cookie twice. These aren’t in any way similar to my cardamom cookies or my American-style chocolate chunk cookies. Instead, the consistency found within the bites is both soft and fluffy; almost cake like, but not quite. This trait makes these cookies, rather conversely, almost more British than American. It’s rather tricky to decide whether there’s something morally, or indeed culturally wrong with such a thing. Anyway, for my vegan friends, you may want to try this vegan chocolate that I know you’ll love.