This recipe for Christmas Baked Rice Pudding is rich and creamy, and packed with warming whole spices. The perfect dessert for a cold winter’s evening. Rice pudding – baked or otherwise – is one of those desserts that only comes around every so often. But when it does, you quickly remember why you enjoyed the last one you had quite so much.

It is rich, comforting food. It’s good food. Ok, it doesn’t sound particularly enticing – who in their right mind would choose baked rice pudding over a chocolate bomb?

This recipe – in truth – is an adapted version of my recipe for spiced rice pudding from way back in 2014. And it works just as nicely as a baked rice pudding, as it does a boiled one.

It just so happens that the whole spices in this rice pudding – cinnamon, clove, cardamom, star anise – lend themselves incredibly well to the festive period. In fact, the one pictured is going straight to a dinner party.

And could anything be more warming, more reassuring than that golden layer of thickened milk/cream/nutmeg covering the pudding? What I hadn’t realised, though it seems so obvious, is that rice pudding is one of those ubiquitous dishes, with almost as many iterations as there are cuisines worldwide.

And it’s little wonder. Much like flatbread or pancakes, rice pudding is inexpensive and achingly simple to make with just a few ingredients.

At its most basic, rice pudding need be little more than leftover rice, milk or water, any flavourings you might have to hand, and something to give it just a little sweetness. 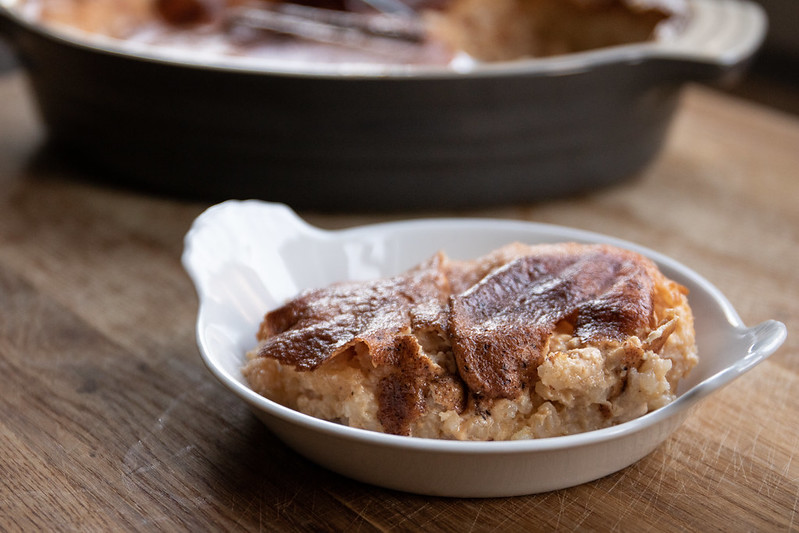 Naturally, you may wish to make this baked rice pudding ahead of time – exactly what I did. And it’ll keep for two or three days if stored quickly and properly in the fridge.

That said, a word of warning; for safety, either eat the leftovers cold or cover them and give them at least 30 minutes to heat through at around 120C (fan).

Finally, make sure you reserve some cream to serve alongside the baked rice pudding. A little goes a long way, and just a splash of cream will give the dessert an unmissable luxuriousness, especially if you’ve reheated yours.

No doubt someone will tell me that rice pudding should be served with a dollop of jam – and it often is. But in this case, adding a tablespoon of intense flavour to the mix will only detract from the subtlety of this dessert’s whole spice flavour.

We love and appreciate you’re recipes,many thanks

Love your recipes!! Wish we could hear from you more often! Merry Christmas

Thank you – I will try. Life is busy, but I seem to have the desire to write recipes for the time being…

This looks yummy. I have never worked with cardamom pods before. Are they difficult?

Ooooh v happy to see you back.

Thanks! I can’t promise for how long it’ll be – mainly I just seem to pop up, do a Christmas recipe and disappear for 2 years.

Where were you? I love your recipes, I’m glad to see you’re back!!

Hi Laura – Just busy with life and other hobbies I guess. I’ll try and post more frequently than twice every 2 years!