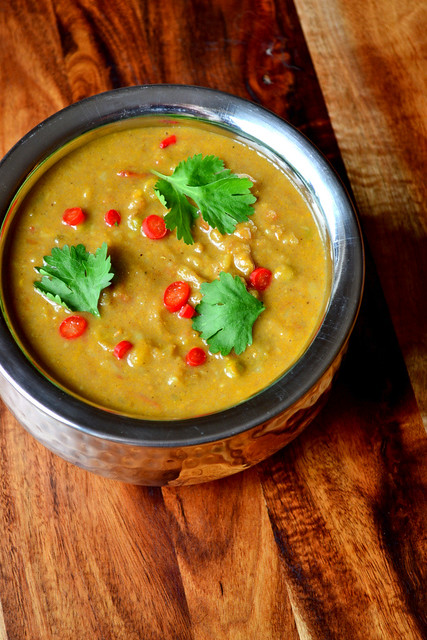 A popular street food in Mumbai, Pav Bhaji is a vegetable curry served alongside soft bread. As with most Indian recipes – street food or otherwise – it is a dish with innumerable variations. But with variation must come a certain level of consistency, and you can rest assured that Mumbai pav bhaji will regularly contain potato and peas.

If you can look beyond peas and potatoes – I often find it difficult to – other vegetables often used include cauliflower, carrots and beans. Essentially, everything is within bounds. Only your imagination limits you. And you can use different combinations of vegetables to alter your pav bhaji. Carrots, for instance, will sweeten the dish, while potatoes thicken and cauliflower does both.

Like many of my most recent masala recipes, pav bhaji is made entirely without fuss. The use of butter is, however critical; simplicity of flavour makes it difficult to skimp on the fat. Please don’t use only oil. It’s not worth it. 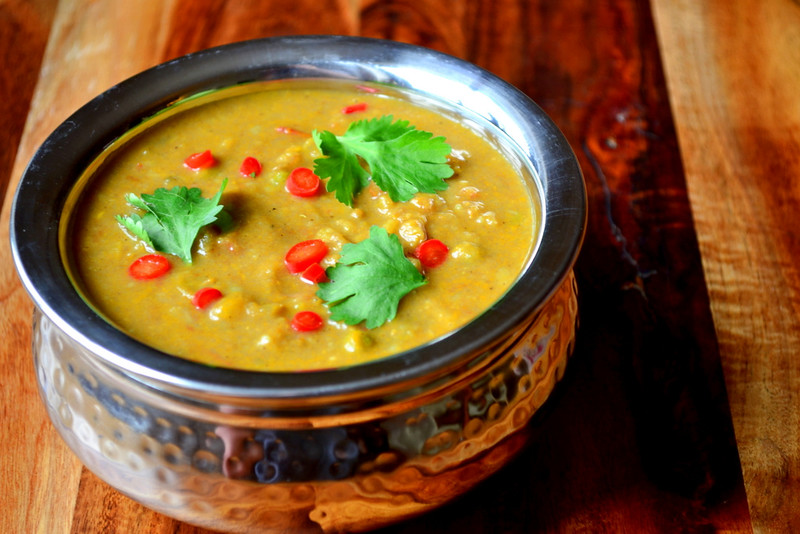 Many of you will be wondering what on earth pav bhaji masala is. It certainly isn’t a spice blend you’ll easily find. So you’ll want to make it! Though it can be simplified, you’ll need cardamom, coriander seeds, cumin, black pepper, fennel, chilli (optional), cinnamon, cloves and amchur powder. Click here for the recipe…

There are many possible variations on the theme of the basic pav bhaji recipe. It’s a dish you can play around with to your heart’s content. But if you’d like to transform it from what is firmly a side dish into more of a main, try adding some golden brown cubes of paneer cheese. Delicious.

If you’re interested in finding out more about lesser-known vegetarian Indian dishes, check out my recipes for Rajma Chawal and Moong Dal Khichdi… 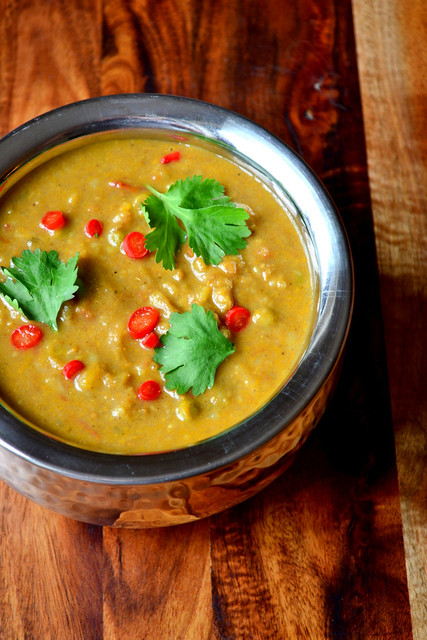 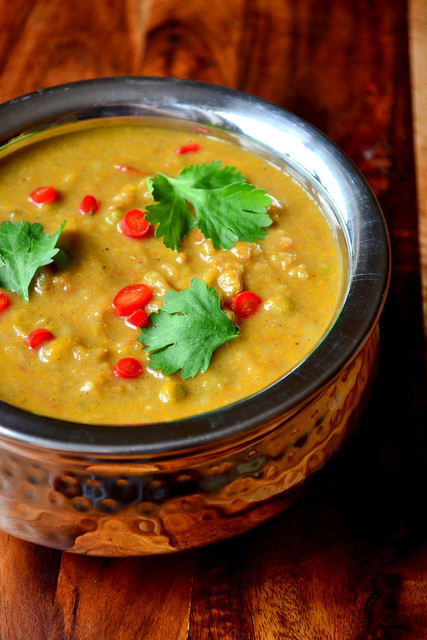 Cost: It should be of no surprise that this vegetarian example of Indian street food is frugal in the extreme. A mere £1.50.

I guess we were both thinking Indian today. Looks rich and delicious.

Thank you, Rosemary – it was wonderful.

Hi, Nick. I agree about frugal not meaning cheap. I had an argument about frugal as opposed to cheap with a friend who shops for food at Walmart. She felt that she spent much less money than me since I shop at Whole Foods and Farmers Markets but she ended up spending $600.00 per month for food when I was spending around $450.00. I grow a very large garden and make most food from scratch. We also eat more vegetarian meals or meat as a condiment rather than center of the plate. I do not buy cheap ingredients I just buy inexpensive foods like organic beans, organic rice and other grains as well as organic veggies. We also eat seasonally so we are not buying tomatoes in January or Watermelon in December. Love this blog. Great job.

We always get our veg from the grocer and our meat from the butcher – I spend far less than anyone I know on food. I always try and buy British too. So happy you like the blog. Unfortunately, we have a lovely flat buy no garden. Can’t wait to have space to grow!

Butter always make things better and I agree with you, some fats are just not worth to be cut!

I never cut the fat, just do more exercise!

Think I would go for home made chapattis rather than bread and butter.

Well, I guess it’s a personal preference. I believe the “traditional” thing to do would be a softer, leavened bread. But whatever you prefer!

MMMM lovely recipe as always Mr frugal. thank you . I am going to make this tomorrow, But one question please re the soft bread rolls if I may be so cheeky …. Can I make the dough Tonight, or one night, and put it into the fridge to prove overnight? So that as well as for supper with this recipe, I can have them wAem for brunch say, freshly made?? Thank you. I have posted this question on the bottom of the rolls recipe but you may not read that as it was last year’s posting!

Yes, I’ve seen both comments 🙂 – of course, that’s a great way of making bread. Might even end up with a stronger flavour! I hope they turn out well and you enjoy your pav!

Thank you. Got all the ingredients except the mango powder …. A little trip to a large tesco might have to be made!

You might find that difficult to track down. Ever at a large Tesco. It isn’t absolutely vital if you can’t find any!

Oh man, we’re totally on the same page this week! This would go beautifully with the Saag Paneer. Looks delish!

It would indeed – thank you!

This looks so delicious! Can’t wait to have this for dinner very soon 🙂

Thank you – I hope you manage to try it!

Beautiful! Have had a curry free month (not complaining as I feasted on Spanish food!) but now I need to make a curry and this one fits the bill perfectly!

I can’t do curry free months… too tempting!

Pav Bhaji is my al time favorite quick and easy food. I was born and raised in Mumbai and I have experienced numerous variations to this dish. One of the best variation i have come across is Cheese Pav Bhaji. I agree it may not be the most cheapest option but its worth trying. Just grate some cheese before serving and you will have a mouth watering dish with some proteins. There are also many variations to the texture like one of them is – KHADA BHAJI which means the veges are cut and not smashed. You can see the literal pieces of the vegetables used. Another one is SADA Bhai which is the most common way and here, all the veges are smashed like thick puree.
To add some crispiness, have it with roasted papad. The crunchy sound is what makes me enjoy this dish.

Thanks for all the advice – I’m very keen on trying and maybe posting more versions. Particularly with cheese.