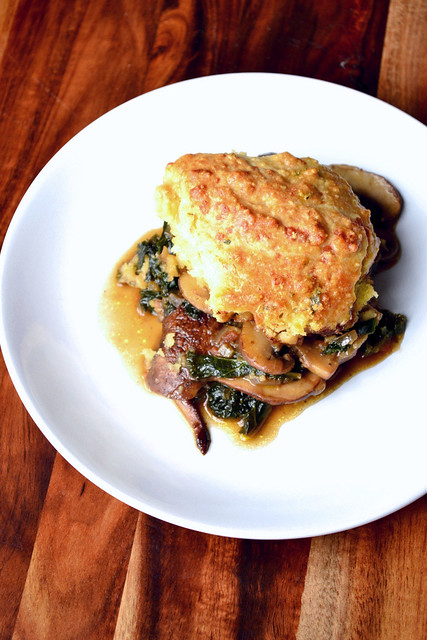 There’s something indulgent about crowning an already delicious mixture of ingredients with heaving spoonfuls of cheesy, creamy scone batter. And while the contents of my recipe for Mushroom and Kale Cobbler may seem immoderate, they conspire to create a wholly comforting meal. One you’ll find almost irresistible.

Cobblers have their origins in early British American colonies. Suet pudding being difficult to come by, settlers would use ingredients available them to create these hearty, nourishing dishes.

And it was the same frugal mindset that popularised the cobbler in Britain during the Second World War. Originally a dish that required little to no butter – it being rationed – the Ministry of Food encouraged British households to take full advantage of the humble cobbler.

With or without butter and cheese, cobbler is certainly a humble dish. Immoderate it may be, but frugal it remains, particularly if you opt for the vegetarian approach. And with nutty mushrooms and sweet kale pairing as well as they do, who wouldn’t? 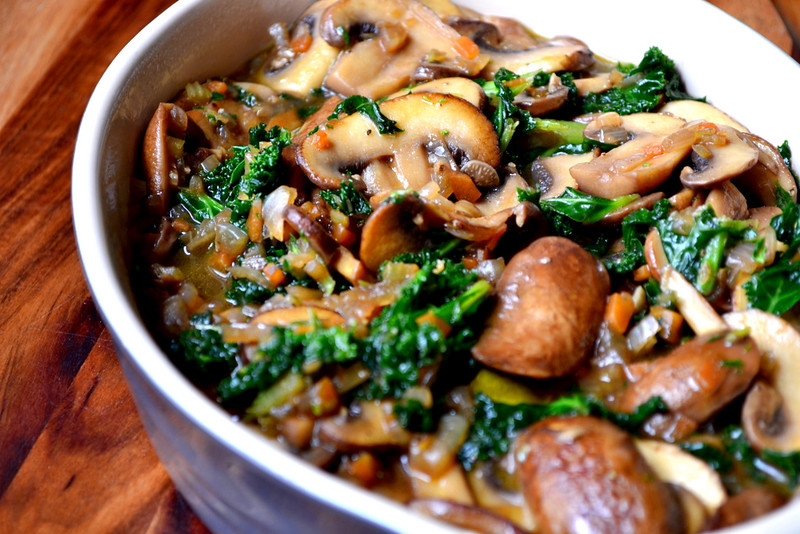 One thing you may wish to note before preparing your mushroom and kale cobbler is the consistency of the scone batter. Forget everything you know about the traditional British scone; these scones are far wetter. They should be just firm enough to remain autonomous from one another, but wet enough to scoop easily.

To my mind, such a mushroom-heavy casserole is an adequate replacement for any meat dish. And far cheaper. But if you would rather a meaty alternative for your Sunday roast, give my Leftover Lamb Hotpot or Toad in the Hole a try… 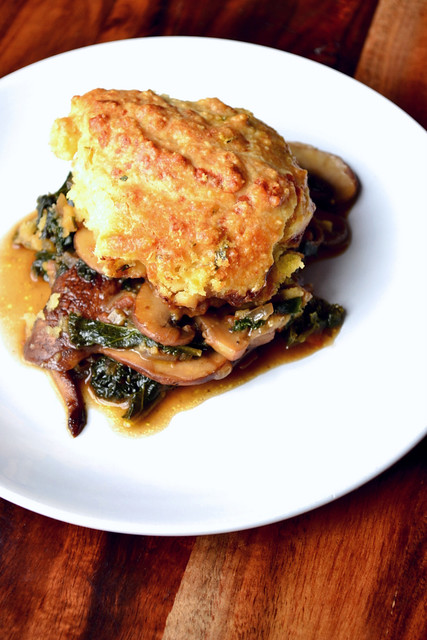 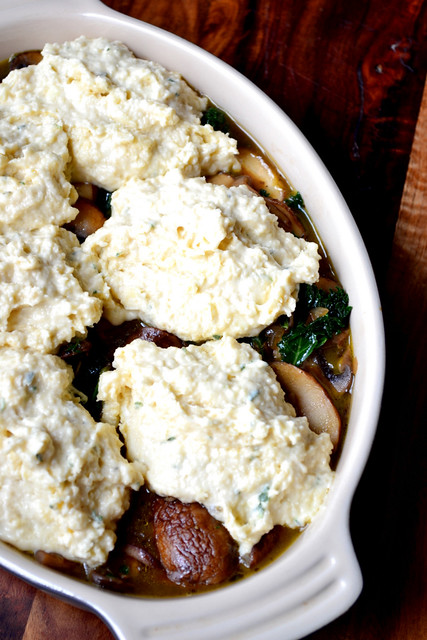 Cost: A dish comforting in the extreme, you might expect this recipe for mushroom and kale cobbler to be rather more expensive than it is. As it happens, at a cost of roughly £3.20 it’s hard to argue with the frugality of my cobbler; it makes for a compelling weekend treat.

19 replies on “Mushroom and Kale Cobbler”

Me too – used to really hate them, but can’t get enough these days.

Rather late in the year for kale in the UK, if you, like me, grow your own, suggest using double the amount of spinach.

Perhaps a little late, but there are always alternatives!

What a great veggie dish!

Thank you – I think it’ll be a recipe we go to more often.

OOo wow, this looks simply divine! This is such a great vegetarian meal 🙂 Pinning!

Thank you! It was delicious. Thanks for pinning – it really helps keep my website popular :).

What a great meal…
Like the idea of the cheese scones for a change to the usual ‘cobbler’.
Good veggie meal.
I would imagine adding any seasonal spring greens to this recipe would suffice if Kale is difficult to find at the moment and shouldn’t alter the dish too much.
It’s interesting to know the history behind different dishes, where they originated from.
Many thanks,
Odelle Smith. (U.K.)

I might try a sweet cobbler too at some point. Yes, any spring greens or suitable cabbage would work.

Nick, this sounds delicious, and you made it look soooo pretty as well! Glad I’ve added Frugal Feeding to my Sites I Visit page so that I get round to it regularly!

Thank you! Glad to me there. I hope you try a few of my ideas 🙂

Expect it to be delicious and hearty. And the scone topping is inviting. Is there any way I could reduce the quantity of butter? What would be a good substitute with lesser calories maybe.

I’m not really sure what you could do. A bit of butter never hurt anyone!

Ok this looks maddeningly good. It’s been overcast here all day and I’m in desperate need of some comfort food.

This is what you need – completely comforting!