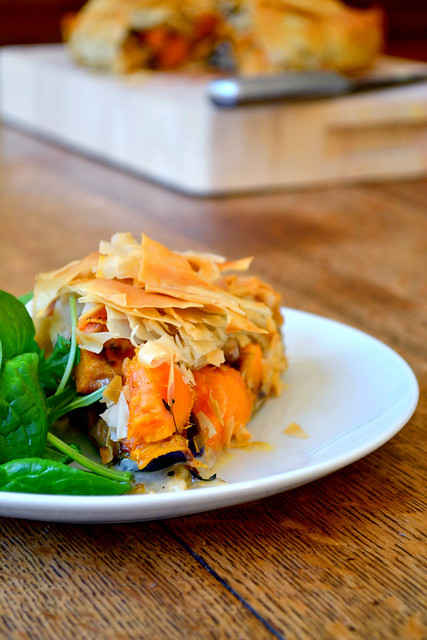 If ever there were four ingredients that worked perfectly in tandem, then they are in this Sweet Potato and Blue Cheese Filo Pie. Added to the two headline ingredients, roasted red onion and sautéed mushrooms round out this simple pie. And if you’re quick, it might be ready within the hour.

But it isn’t all soft textures. Certainly not! The inclusion of filo isn’t an accident, you know. Brushed with olive oil and baked at a relatively high temperature, you can be sure that there’ll be a hefty crunchy to accompany the pie’s succulent filling.

The type of blue cheese you use is completely your decision. Personally, large chunks of incredibly blue cheese aren’t pleasant. If you want a cheese that’s going to melt away slightly, give something soft like Dolcelatte a go. Fancy chunks of flavoursome veins? A blue Stilton might work well. 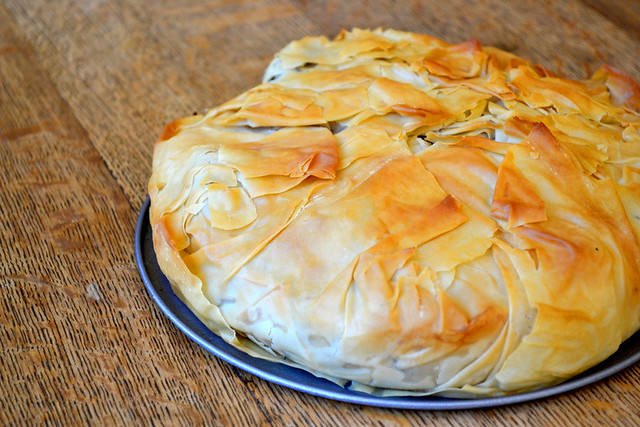 On a more basic level than cheese selection; don’t undercook your pie. It’s important to remember that the pastry isn’t only on the top, and any amount of undercooking is likely to result in an unpleasantly soft filo. You want it to be crispy all the way around.

If you think you are struggling to achieve a good bake, try removing the sides of the springform pan once the pie is able to maintain its own form. But be wary of removing it too early; collapse would spell disaster.

For something a little different, without the need of using pastry, check out my recipe for Pumpkin and Chorizo Pie, topped with a creamy layer of mashed potato and pumpkins. 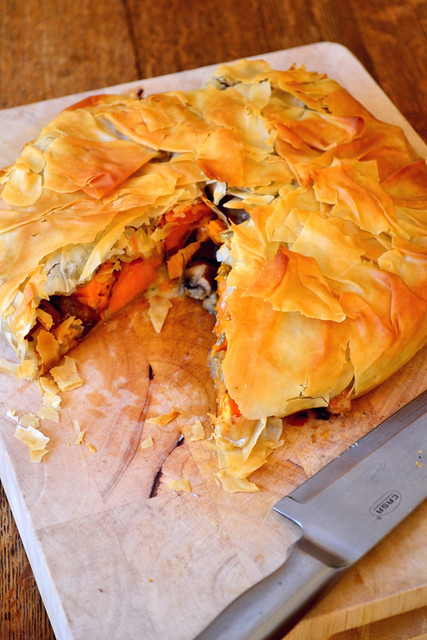 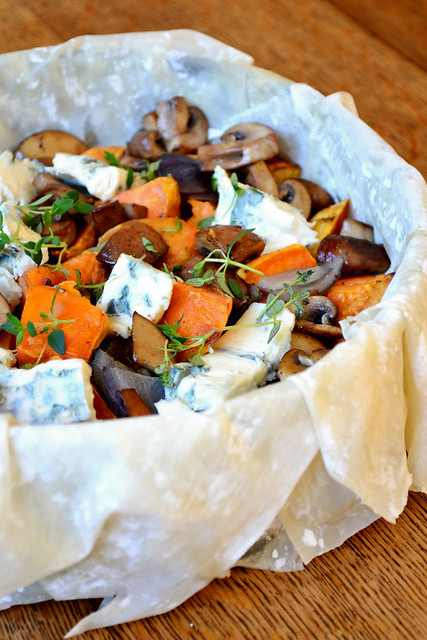 Cost: Despite, for ease of life, using shop-bought filo, your pie shouldn’t set you back much more than £4.50. Of course, the cheese you use will likely have the most say in any outcome of price, but anything too expensive would be a waste.

Sweet potato and blue cheese together are my life! This looks great, gorgeous gorgeous photos as per.

I’m not a huge fan of blue cheese, but I did really, really enjoy this.

Oh my goodness, this looks so good!

Oh it absolutely was; I don’t know why I haven’t done it before.

This looks SO GOOD!!!

It was even better than it looks actually – a real comfort dish.

Wow, I want this right. Now. And it’s not even lunch time yet.

I often hate looking at delicious food in the morning; I end up eating more than I intend to.

It was certainly moreish.

Genius – apart from tasting fantastic (which I just know it does!) it looks so very beautiful too.

Thank you – it did taste good, despite my not really liking blue cheese.

Well done for making it despite not really liking blue cheese!

Certain things get demanded of me and I can’t refuse!

I will have to try this! Thanks for sharing.

My pleasure – I hope you enjoy.

That sounds delicious. Do you think it would work with butternut squash, as I have one that I need to use?

I’m so sorry I didn’t reply sooner! Squash would be perfect!!

No problem, I still have half of it left!

[…] Sweet Potato and Blue Cheese Filo Pie by Frugal Feeding. I have a bit of an obsession with sweet potato at the moment and this sounds so […]