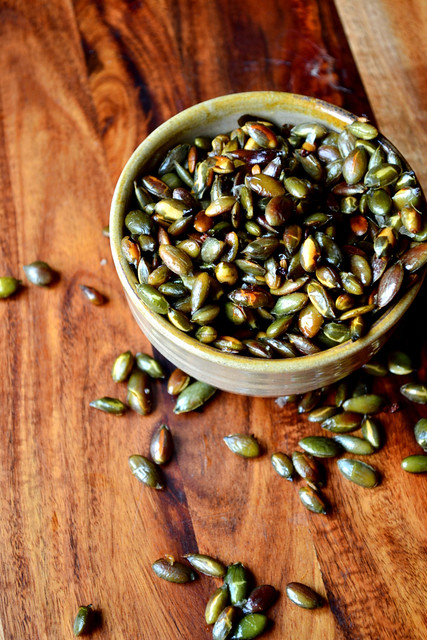 Did you know that pumpkin seeds go pop? Just like popcorn, only it’s a little less spectacular. But what popped pumpkin seeds lack in volume, they make up in flavour. Already more flavoursome than standard popcorn, Pumpkin Seed “Popcorn” becomes an exceptional snack with a simple addition of cumin, chilli and salt.

Whereas cumin and chilli is always much the same, the quality of salt varies immensely. This may be frugalfeeding, but it’s worth spending money on your salt. My salt of choice is Maldon; it’s widely available and has a genuinely pleasant flavour. Really want to treat yourself? Give Halen Môn a go. You’ll want to eat it alone. By the spoonful. 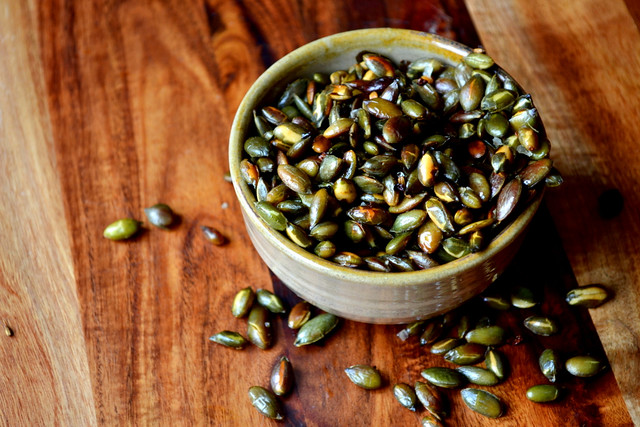 The mix of cumin and chilli is just a serving suggestion, of course. There’s no limit to the ways in which you can flavour your pumpkin seed popcorn. Salt alone would be a good option. And I’d stake my – currently non-existent – house on sweetened pumpkin seeds being mightily yum. 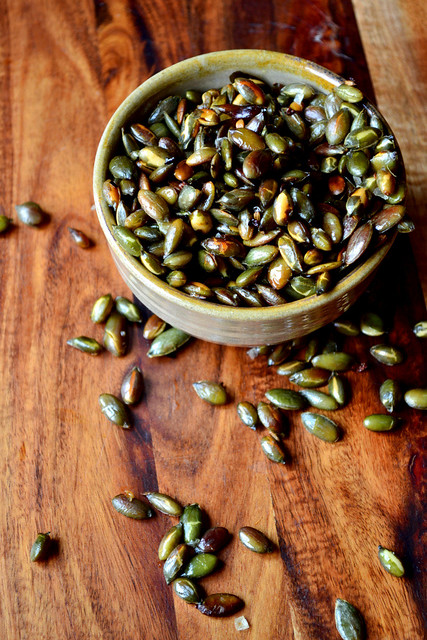 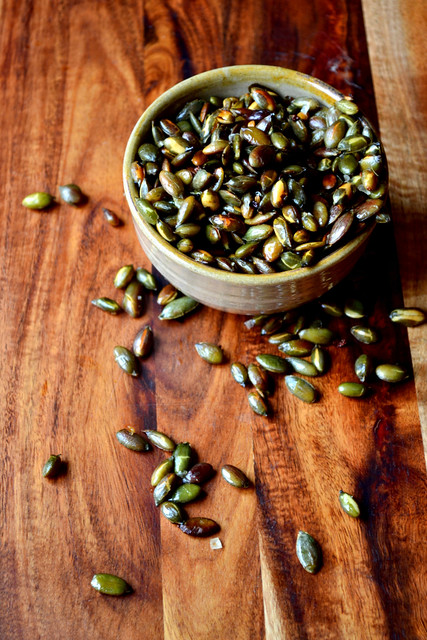 Cost: Unless you’re buying your pumpkin seeds irresponsibly, they aren’t going to cost very much. In fact, it’s almost not worth stating what this snack will cost you. But I’ve started so… 80p should do it.

I tried this last evening in a cast iron dutch oven. I don’t know where I went wrong, but the seeds simply turned black. I didn’t hear any obvious popping until I poured the blackened seeds onto a plate. Then I heard crackling.

That’s strange – I’ve never had that… Duff seeds?! Perhaps you had the temperature too high?

Please do, it’s just so quick.

Mmmmm! Loved them! I made these today, but I used curry powder in place of the cumin as I was out of cumin.
Thank you!

Oh great! That was speedy. Glad you enjoyed.

I had just bought a bag of pumpkin seeds – I todt them for salads, but this sounded better!

Give them a go! They’re so simple anyway and you can’t go wrong 🙂

Looks delicious! Steve ruined a pot the other day popping up sorghum. Amazing what one can pop up, if they don’t mind ruining a pot. 🙂

Ah! Well no pots were ruined here. Actually, they make very few marks on the pan compared to popcorn itself.

Yumm when i was four my grandad roasted pumpkin seeds and gave them to me as healthy treats now im 53yrs older and still i remember thank u for yr post.

My pleasure – thanks for reading!

Love the sound of this. I have popped pumpkin seeds before – when dry roasting for a recipe. They can be quite violent!

They can indeed. I found out by accident too.

I’d never have thought of doing this with pumpkin seeds – I love the flavours you’ve put on them though – they sound really tasty.

I only stumbled across the method by accident! Thank you 🙂

Who knew? Those look fab! Can’t wait to try them.

I only found out by accident! A happy accident.

[…] the meantime, Frugal made some wonderful looking spicy pumpkin seeds that looked interesting.  I found some good quality shelled pumpkin seeds at […]

Raw pumpkin seeds from the inside of a pumpkin direct?
I am soaking mine in water and bicarbonate to remove dodgy enzymes first… Will the popcorn still work??

I honestly do not know! Make sure to use the kernels sans husk.

This is such a great idea! who knew!

I know! I was so surprised when I realised.

[…] iron deficient vegetarian stops by and decides to sample the spinach recipe, I sprinkled some of Frugal’s pumpkin seeds on top for a protein boost because I care […]

Aren’t pumpkin seeds the best? This looks like a great use of them!

They are! So, so delicious.

[…] vibrant fresh oregano, salt, pepper and olive oil.  This always works and you can sprinkle some of Frugal’s pumpkin seeds on these too […]

[…] make this stir fry without the bacon and it would still be good, just sprinkle it with some of Frugal’s pumpkin seeds for protein […]

[…] If you’re after another great and healthy snack idea, check out my recipe for Spicy Pumpkin Seed Popcorn… […]

I’m impressed with your photos, writing and the website design. Very classy. I’m getting into using my pumpkin and squash seeds so this recipe is very interesting. Will try!

Thanks for the positive feedback – glad you like it.