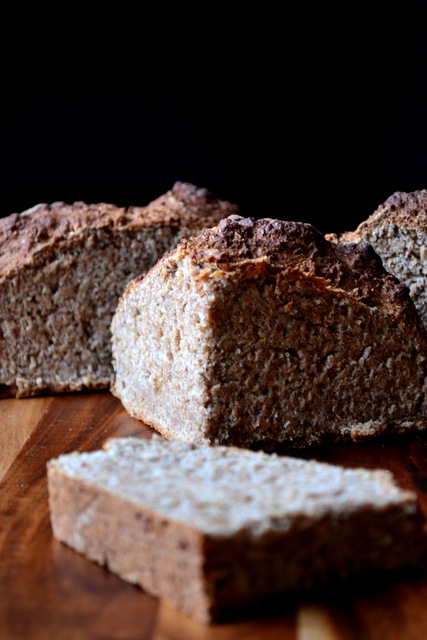 Though baking bread is simple, not a lot of people do it on a regular basis. The reason? Time. Bread takes time. Well, almost all good bread does. But there is an answer. A simple one; Irish Soda Bread.

The difference between a “normal” bread and a soda bread is that the latter makes no use of yeast. Instead, bicarbonate of soda reacts with an additional ingredient – buttermilk – to form bubbles of carbon dioxide. This reaction, in turn, causes the bread to rise.

A clearly different method of leavening, this process yields an unconventional texture. Irish soda bread possesses a closer texture and heavier crumb. It’s more rustic. But still soft and tempting, when made properly.

To make a perfect loaf of Irish soda bread, forget everything you know about common bread making. It won’t help. The last thing you want is lots of stretchy gluten. If you’ve got developed gluten, you’ve got a brick. 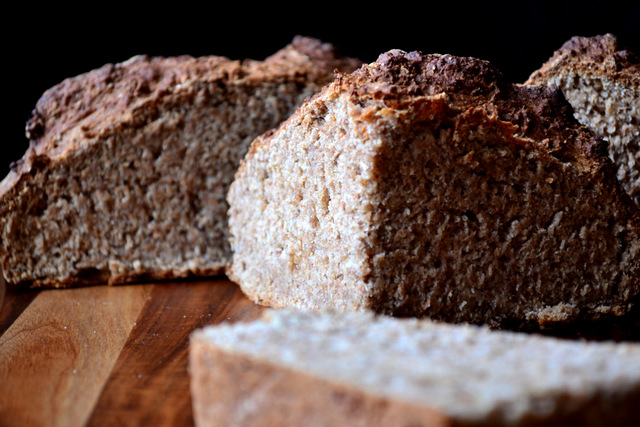 Instead, always use a plain wholemeal flour, as opposed to a bread flour. And don’t, whatever you do, knead it for 10 to 15 minutes. A couple of flips and a turn to bring the mixture together will suffice.

Basically, if you’re in a pinch and in desperate need of bread, then Irish soda bread is your… loaf. Even if you have all the time in the world and crave nothing more than a slice of flavourful bread, slathered with all the salted butter a knife will carry, then you could do far worse. Simply spend the rest of the day pleasing yourself.

Though, if you really must attempt “real” bread, my recipes for Walnut Bread and Seed and Honey Bread will suffice… 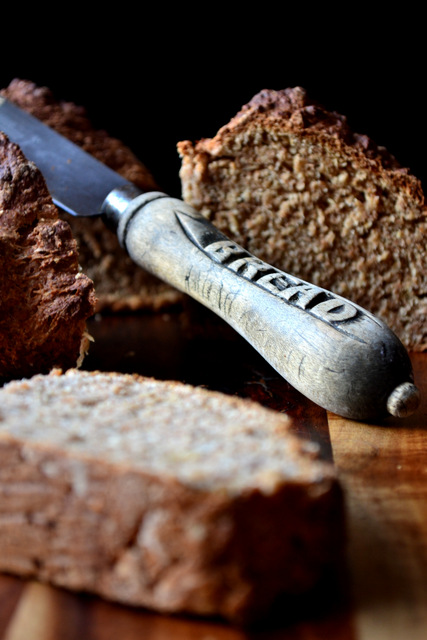 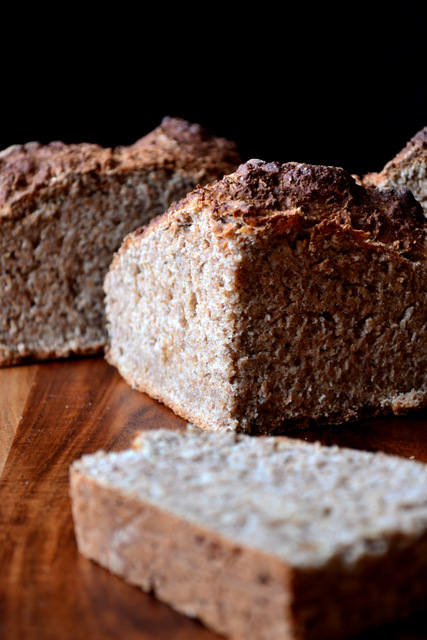 Cost: Though more expensive than an average bread – a result of the addition of buttermilk – Irish soda bread is rather frugal. Indeed, the entire loaf should set you back no more than £1.50.

Can I use lactose free milk instead? I’m lactose intolerant, but I love soda read…

I believe you can use milk mixed with yoghurt, but I’d look that up. You can also use stout I believe, which might suit your preferences. Though, I’d do a bit of research about quantity etc…

A little belated but…. to make a dairy free ‘buttermilk’ add 1 tsp of (apple cider) vinegar to each cup of soy or nut milk. (Apparently oat and rice milk don’t work so well, I’ve heard.)
So for this recipe it would be 1 2/3 tsp of vinegar added to 412ml (or the the full 420ml) of milk.
Give it a quick stir and set to the side for about five minutes before using.
This is the standard practice for making vegan ‘buttermilk’. I’ve used it loads of times. 🙂

I love, love Irish Soda Bread! Especially with corned beef and cabbage 🙂 I will definitely be making this. Thanks Nick!

Awesome – I hope it turns out well :). I’m a big fan of corned beef, but haven’t eaten it for years.

Hmm, I have always wondered about this bread, i will give it a try soon.. great tips too.. thank you.. c

Please do – it’s such a simple bread, but there are a couple of things to watch out for.

Can I use natural yoghurt instead of buttermilk?

Yes Kate, with no problem at all, mix with a little milk to thin down yoghurt slightly.
Rub-in 1 oz. of butter into flour & it will taste just like you’ve used buttermilk.
Can also be made by using milk, make it sour by adding a a little lemon juice, let it stand for a few mins. mix well & add to your flour/salt mixture…
Hope that you enjoy Irish Soda Bread as much as we do, good luck,
Regards, Odelle Smith.

There we go – thanks, Odelle!

Odelle, thanks for this really kind response which I only just noticed tonight! I’m gonna try making the bread this week 🙂

You can use yoghurt, but I’d recommend getting a live yoghurt, which is slightly different. You can usually pick them up from whole food shops or even large supermarkets.

Nice, like it that you use wholemeal flour & buttermilk in your recipe too.
I find that by rubbing in a little butter does help loaf to be less crumbly in texture.
I didn’t add any honey, prefer taste of Soda Bread without it.
Gentle mixing is the trick for a good crumb, otherwise like you said, it’ll end up heavy & too dense.
I like to add medium ground oatmeal to dry mix, as this imparts a beautiful ‘nutty’ taste & texture.
Great recipe, love Irish Soda Bread, many thanks, Odelle Smith.

Thanks, Odelle – I guess everyone has their preferences. I think I’ll try it using stout next and see how that turns out.

I used to make this bread all the time! I love how quickly it comes together, and no kneading needed!

I know, it’s a breathe of fresh air, having such an easy bread.

this looks great! wholemeal= whole wheat? I am in the US

Unfortunately, I’m in the UK and can’t say for certain. However, I’d bet money that it’s the same thing!

It’s such a lovely bread and, I always think, a good excuse for thickly spread butter!

[…] Once the lentils are tender season the soup generously and add the handful of chopped parsley. Serve immediately with a little shredded spinach. It’s delicious with Irish soda bread. […]

I just love the way you explain everything so clearly. I have never ever made bread before. But looking at this I want to give it a try 🙂

Thank you! You should, this is as easy as it comes!

[…] inspired by Frugal feeding and you can find it right HERE.  Click through to see the recipe I used for this Irish Soda Bread with a little tweaks of my own […]