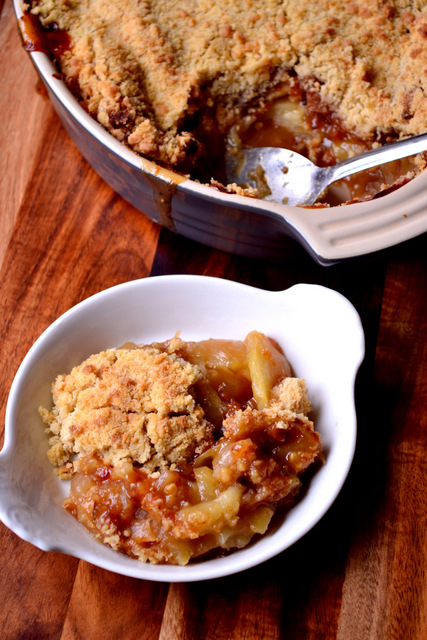 Christmas is over and the New Year has been and gone. And while it’s proving difficult to come to terms with the fact it’s 2015, I bet that you still have some of 2014’s mincemeat hanging around in your fridge. But what is to be done with leftover mincemeat? Well, you can give this recipe for Leftover Mincemeat Apple Crumble a try for starters.

Admittedly, leftover Christmas mincemeat isn’t a big issue; it lasts for well over a year if kept in the fridge. In fact, you could argue that it tastes even better if left to mature for 12 months.

On the other hand, it’s not always practical to have jars or tubs of mincemeat lying around, taking up valuable space. It can be used for far more than just mince pies too. So much so that it’s worth broadening your preserved fruit horizons wherever possible. 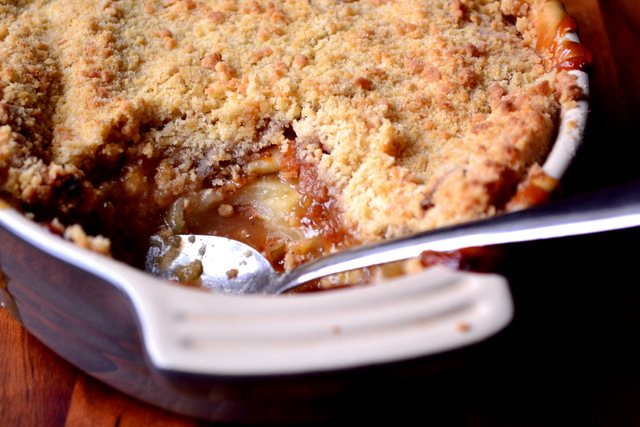 As mincemeat contains generous sloshes of brandy – or, in some cases, whisky – using it to flavour your apple crumble is a great way to create a simple pudding for the adults at the table. Kids can be catered for too, but perhaps it would be better to use a less pungent product.

Leftover mincemeat apple crumble is easy to throw together too; quickly cook the fruit, transfer it to an oven dish and top it with butter and flour and you’re nearly there. And who doesn’t like this rustic pudding anyway?

If you do fancy something a little more delicate, however, you could easily turn this crumble into a pie topped with shortcrust pastry. Either way, you’ll not be disappointed. Bon appetit and a Happy New Year! 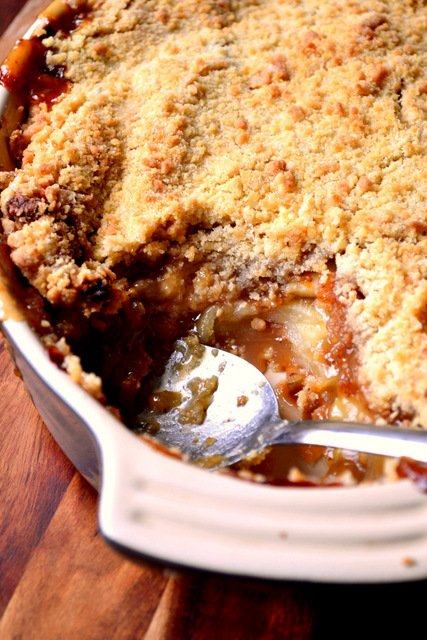 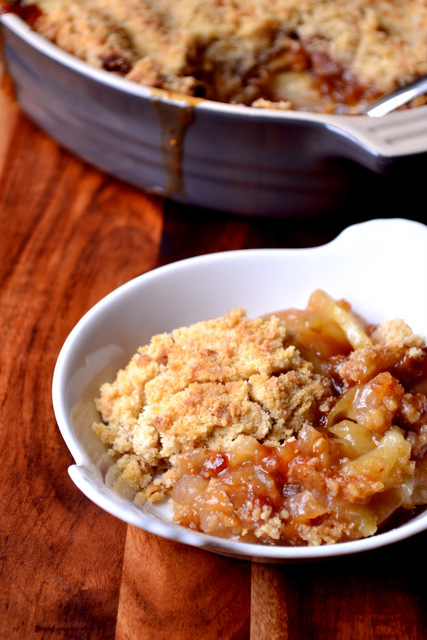 Cost: Old fashioned puddings like crumbles and pies never cost too much to prepare. Added mincemeat increases the price a little, but if you have it hanging around then there’s no harm done there.

All in all, this delicious recipe for leftover mincemeat apple crumble should set you back no more than £2.20.

I never would have thought of putting mincemeat into apple crumble. It would work together so well, sounds great!

I didn’t think of it until my girlfriend’s mum did it – I was astounded!

Sounds yum and as for your comments about kids not liking it, mine adore mincemeat and have from an early age, being bribed through dull carol services with a festive mince pie or two from the age of about one. Any alcohol helps kids to sleep, don’t you know??

I guess every kid is different; I know I didn’t like a strong alcohol flavour when I was young. Though I did like the cheaper mincemeats very much, which don’t contain so much alcohol.

I meant to say we make mincemeat muffins and mincemeat flapjack with our left overs (or indeed, with a brand new pot especially purchased).

Mincemeat flapjacks are to-die-for. One for next Christmas I reckon.

Can’t make me wait until next year for mincemeat flapjacks, so used your recipe for ‘Hazelnut & Chocolate’ flapjacks which we all love & enjoy, they’re superb drizzled with Dulce de leche, made for each other & me!
Apologies, back to flapjacks, used your recipe with a layer of mincemeat between hazelnut & pecan flapjack, added another layer for good measure, they did take longer to cook, turned out beautifully, so pleased with them…
All credit is down to you and the excellent recipes that you provide us with, many thanks,
Odelle Smith.

Thank you! My girlfriend is going to make mincemeat flapjacks soon; we have SO much mincemeat left (I made a huge tub full).

What a great idea!

Genius! Ah… I don’t have any leftover mincemeat. Do you think it’s acceptable to buy some to make this with?! Is anyone still selling it! Help! Must. Get. Mincemeat!

Well, it goes against the principle, but you could buy some for cheap around now. You could also make some 🙂

Thank you – it was and still is very nice.

Keep the kids away from it. I’ll eat it all. Lovely.

I bet you will, Conor – good after a cycle!

Brilliant, combining my two favourite things … and I think I have some mincemeat in the fridge …

You should totally made it; we’ve made two already! It’s seriously delicious.

Genius.. and totally agree here; since when is leftover mincemeat a problem? Maybe we eat it by the spoonful…

Definitely not a problem, but I have LOADS left – oops.

Great idea. Too bad I didn’t make any mincemeat…

Ah! That is a shame – next year perhaps? Thanks, Michelle!

Delicious idea for leftovers. I love the objective of your blog. So much food is wasted these days.

It is and it’s a massive shame. Glad you agree with what I do 🙂

oh this looks so yummy! I’ve already asked my hubby (the chef in our house) to make this!

Fantastic – I hope you both enjoy it if he does!

Thank you – it was rather delicious!

Hi, I thoroughly enjoy your blog and have used a lot of recipes tonight we had mango chutney with curry which is a great recipe. The kalonji flat bread is also delicious. Photos are always very good as I like to have an idea what finished dish should look like. Keep up the good work looking forward to a book perhaps.

Thank you very much! I’d love to do a book; hopefully it’ll happen at some point:). We’ll see! I hope you continue to read my recipes.

Made this last night with my/ your homemade fig mincemeat and some oats. Twas a triumph keep up the good work. Missed you over Christmas.

Fantastic! Glad you enjoyed. I was a bit ill/busy over Christmas, so not much time for writing or cooking. I’m back in full swing now though 🙂

Yes it was beautiful. Made it twice more now, adding different ingredients to change things up a little, thanks for a great recipe idea, appreciate it. Lovely pics, pleased your back after the holidays.
Looking forward to the Irish Soda Bread, are we getting some Irish stew to go with it?

Some Irish Stew huh? I have a Guinness casserole recipe already, but perhaps I’ll make a proper Irish stew next weekend. You’ve made me hungry now 🙂

My maternal grandmother would have loved this recipe! She loved mincemeat and apples. I wish that I could share this with her.

That would have been lovely. Funnily enough, my maternal grandmother would have thought exactly the same!

Just made apple crumble with mincemeat – perfect. Thank you for this yummy idea.