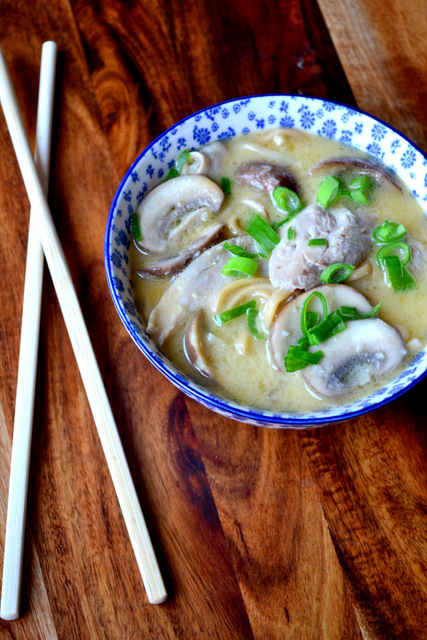 Tom Kha Gai – literally, Chicken Galangal Soup – is a coconut-based Thai soup famed for its subtle sweet and sour flavour profile. Though usually eaten as a curry – spooned onto rice – tom kha gai also works well as a noodle soup; the form it takes in the recipe below.

Featuring many quintessentially Thai ingredients – galangal, lemongrass, lime leaves and coconut – tom kha gai has become a frequently-visited dish in Thai restaurants. A well-balanced soup, it is incredibly accessible, especially for those who aren’t such a fan of the heat the cuisine is renowned for.

Though most recipes would tell you to substitute ginger for the galangal if you aren’t able to find the latter, I suggest otherwise. Their flavour may be roughly similar, but if you do a direct comparison you’ll find it easy to tell the two apart.

Use ginger in this recipe and you risk drowning the delicately balanced soup in a flavour that shouldn’t rightly be present. If you can’t find galangal simply omit it from proceedings. You may not achieve quite the right effect, but at least your tom kha gai won’t be ruined. 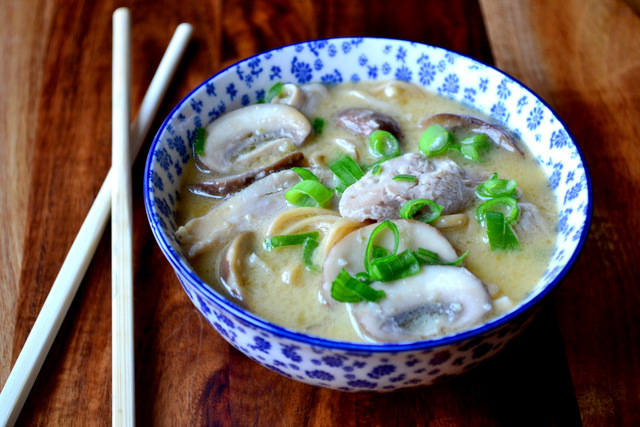 The amount of chilli and fish sauce used below is best described as moderate. If you enjoy heat or the rather unique flavour of fish sauce feel free to be a little more liberal with both. In fact, it’s not uncommon to find three tablespoons of fish sauce in a tom kha gai of this size.

Like my recent recipe for Chicken Chow Mein and older rendition of Fragrant Chicken Biryani, this recipe for tom kha gai is an excellent way to use up leftover roast chicken. Naturally, using leftover chicken has the added benefit of reducing the cost of the dish. 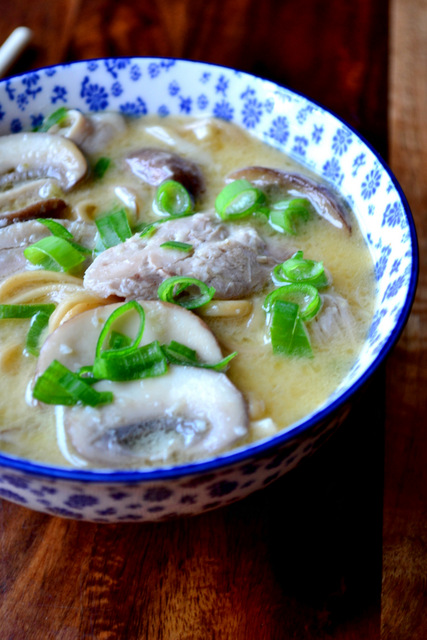 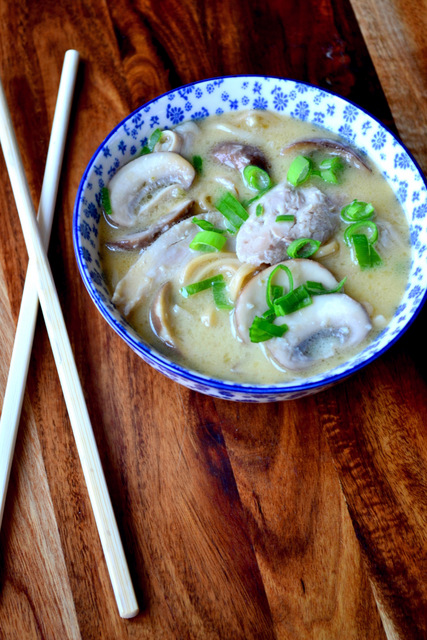 Cost: Ingredients used in recipes like this tom kha gai are usually relatively inexpensive. Including chestnut mushrooms – as opposed to shiitake oyster – and leftover roast chicken brings the cost down further. As such, this meal for four can be made for as little as £4.20.

Now that our weather has taken a turn toward damp and chilly, I’ve been craving this. I’m making it tonight! -Moira

I hope you enjoyed it, if you made it. It’s such a simple dish.

Tom Kha is hands down my FAVORITE SOUP!!! So excited to have a recipe now-thanks! Looks delicious. Wish I had a bowl right now… 🙂

It’s definitely up there for me too! Thank you – perhaps you should make some 🙂

A lovely ‘soft’ version of a crowd pleaser always 🙂 !

wow, I would never be able to find some of those ingredients in stores, but will see if I can get them online. looks great!!

I hope you can – they can be hard to find, but we have a few Asian supermarkets nearby.

I am going to try! coincidentally I bought a can of this soup the day before reading this post!!

You can buy tins of it there? How odd – I’ve never seen that here.

Our family love love loves Thai food. I’ll have to see if we have the galangal root here, it’s so annoying to not have such varieties of ingredients in Calgary. We’ve only recently got lemongrass, I guess I just have to keep asking and they’ll start bringing it in. What a lovely warm soup for our cold winters!

I have my fingers crossed for you, Barbara! Luckily ingredient variation seems pretty good in Britain; you can get almost anything if you know where to find it.

This is one good looking Tom Kha. I would take several helpings no problem

Thank you! I did – it was deeeelicious.

Similar to my homemade coconut “no curry” chicken soup, this seems delicious. When I try it, I will replace the noodles with rice (if add any, at all) and omit the mushrooms, replacing with another veggie or two instead. For my personal needs I have to avoid nightshades like peppers and chiles, and keep mold/fungus/yeast to a minimum for the sake of my sensitive digestion.

I definitely need to get one of these pretty bowls and will look around at second hand stores for one of these treasures. I think it would make the experience that much more pleasant! 🙂

[…] a quicker ramen-esque recipe, check out my Noodle Broth, or for something meaty my recipe for Tom Kha Gai is a real […]