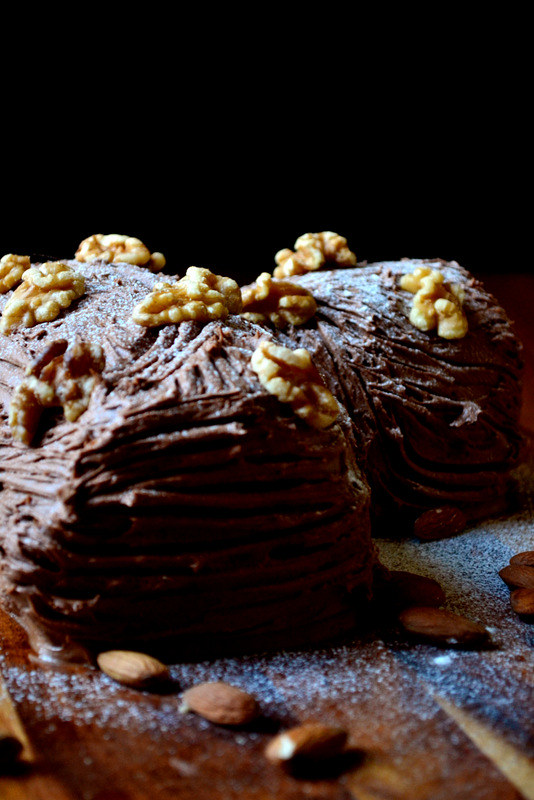 The Bûche de Noël, or Yule Log, is a log-shaped chocolate cake traditionally eaten during Christmas. But the origins of the yule log lie away from the decadent realm of cake, though not so far from festive feasting; even taking us as far back as the Iron Age.

Essentially a generously decorated chocolate Swiss roll, the Bûche de Noël was first popularised as a cake by Parisian bakers in the 19th Century. The history of the yule log, however, is rooted in Iron Age paganism and the cleansing of the air during the winter solstice in December. 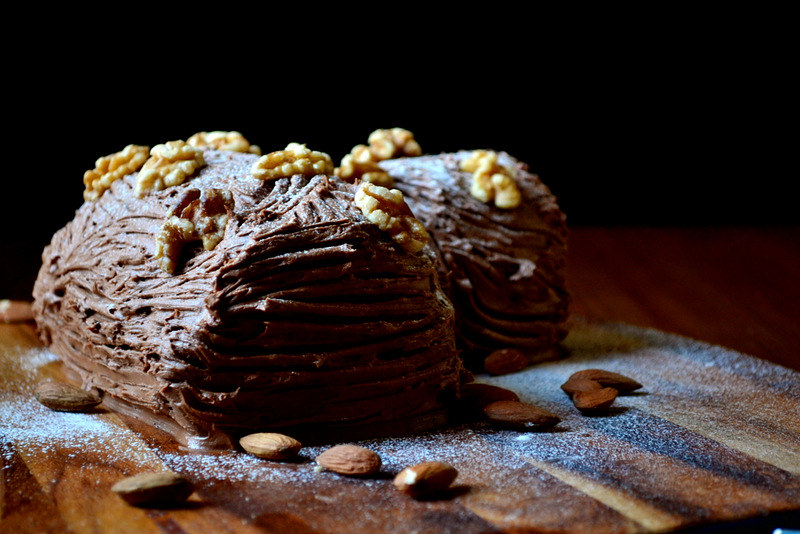 Still, since that sort of behaviour is – mostly – behind us, the light sponge and rich decoration of this yule log recipe is where we’ll busy ourselves.

Being a Swiss roll, there is in a Bûche de Noël a fantastic contrast of textures between the dense cream and buttercream and the light, airy sponge. The sponge is, of course, more-or-less fatless, meaning the cake – despite its use of cream and butter – never becomes too sickly or heavy. Not resting like a breeze-block on your stomach.

How you decorate your Yule log is entirely up to you. I’m not one for enthusiastic decoration, and so opted for relatively mute walnuts and almonds; a sort of forest-like feel. Decoration must be applied, however, and holly is likely the most popular choice. 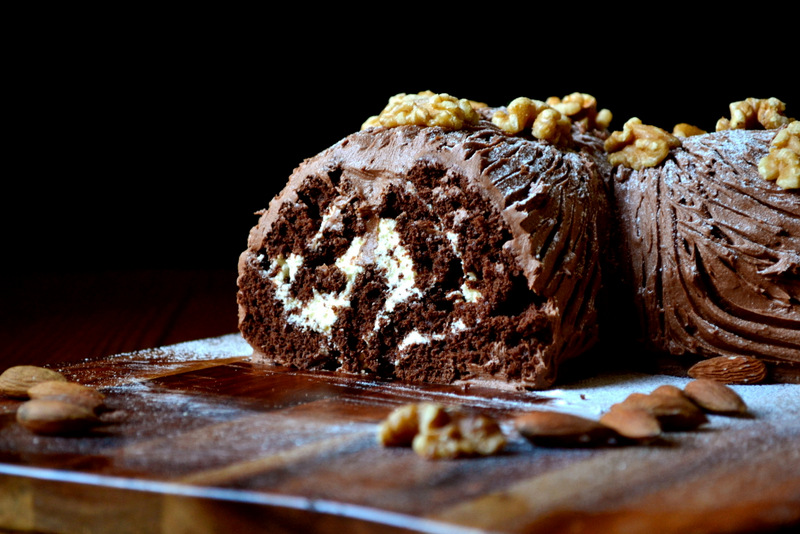 With 10 steps, the recipe below may appear daunting, but once you’ve got your sponge rolled it’s all very simple. The icing of the cake, in particular, is incredibly pleasing and almost makes you wish you had become a plasterer. 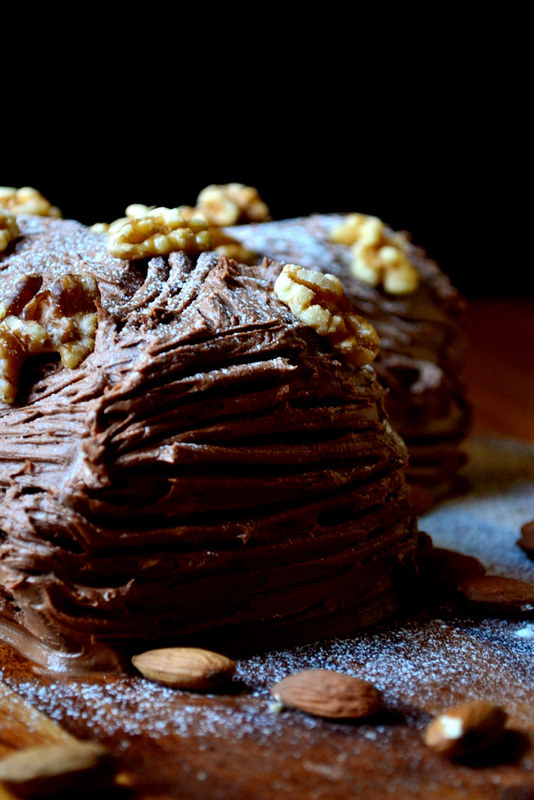 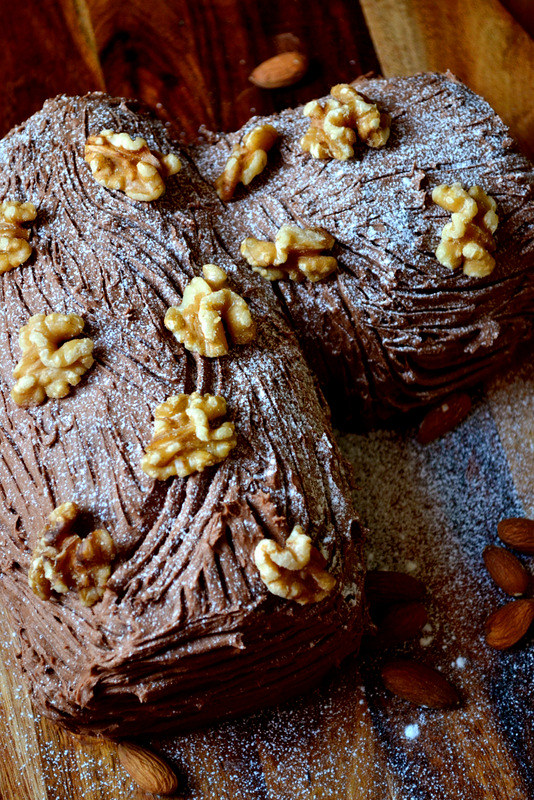 Cost: Though a large cake, this recipe for Bûche de Noël uses relatively few ingredients; eight, to be precise. This means that the cost to make it is perhaps lower than you’d have imagined. Indeed, the entire log and branch can be made for a mere £3.40.

That looks and sounds a brilliant buche de noel.

Thank you, Kay! It went down very well indeed. Especially with ice cream.

That looks delicious – I really must make one this year!

Lovely recipe and I just LOVE the simplicity but graceful beauty of you decoration. My niece, (who was my partner when we ran a bakery/restaurant, and a fine baker herself), goes absolutely mad when she sees a Buche de Noel over-dressed with meringue mushrooms, etc. I must show her yours.

Thank you, I don’t like to go too over the top. I don;t have the patience for meringue mushrooms 🙂

Another cake I intend to make, if I have the time… but first we will have Yule Cocks on the 21st… ^^

looks scrummy, could perhaps add some seasonal mulled cherries in through the cream for the adult version ^_^

Looks amazing – haven’t made one for years…am feeling inspired!

Yay – they’re so much fun, you should definitely make one 🙂

Don’t understand French but I can just say “yummy”! 🙂

Wow, that looks great! Love how it’s filled with cream – I made a Yule Log a year or so ago and it was so heavy and sickly because I filled it with ganache. I think the cream would help that. I also love how you include the price – it’s really interesting to see. Good job. 🙂

Thank you! Yes, I didn’t want to fill it with ganache; a bit too much, as you say. I always include the price 🙂

I do love ganache, in it’s correct place & this light sponge doesn’t require it, you’ve decorated it perfectly to my liking.
The cream filling & butter-cream covering, dredge of icing sugar, almonds & walnuts, what more could it possibly need?
Nothing, it’s pretty gorgeous as it is. Lots of cakes can be spoiled in my opinion, by far too much decoration when there’s no need when the results are like yours.
Well done on a beautiful recipe & finished result. Mine tasted very good & I was extremely pleased with the result, my only wish was that I had made two, as they were first to be finished.
Speaks volumes…Must make another soon, as keep getting requests from family & friends to make them one even though the holidays are over!
I will make a few, have a baking day & ensure that I keep one for just us to enjoy, I only got to taste the end piece that I cut off, better luck this time.