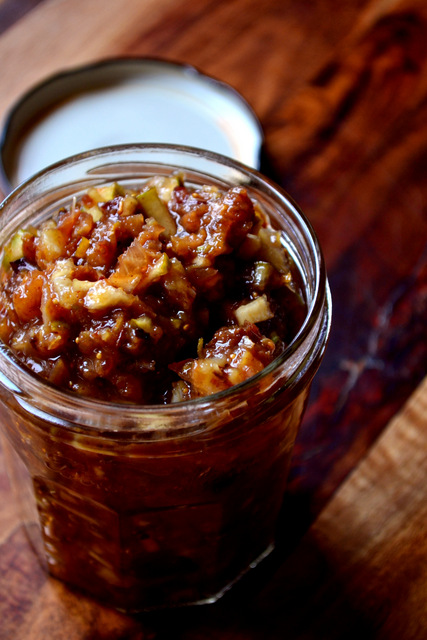 Used in a variety of recipes – though primarily Mince Pies – in December every house has at least one jar of mincemeat at any time. Usually a blend of poor quality brandy and mixed dried fruit, shop bought mincemeat is much of a muchness. This Pear and Fig Mincemeat is different, and is sure to give your mince pies an edge this Christmas.

Packed full of sweet pears, sticky dried figs and luxurious whisky, this homemade mincemeat brings new flavours to the Christmas table, while staying festive and spicy. The tiny seeds within the figs contribute too, bestowing a rather pleasing visual element and intriguing textural difference. 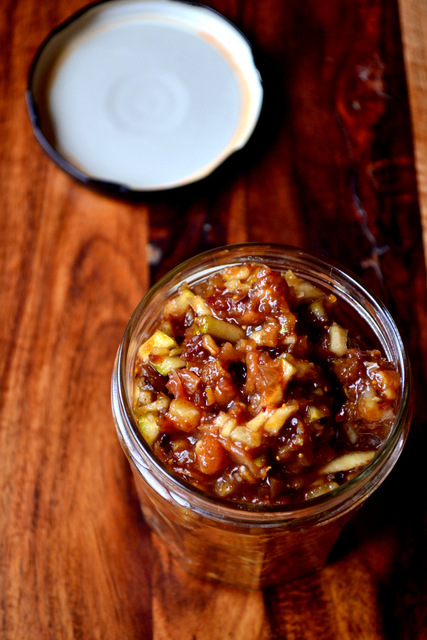 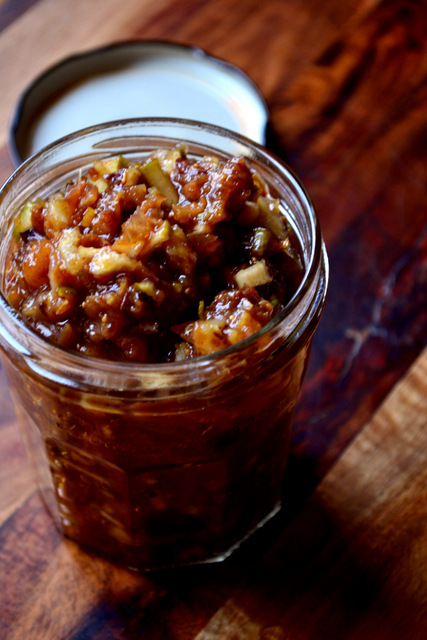 As with my previous recipe for mincemeat, this rendition contains no butter or suet, making for a light, pleasant and absolutely vegan preserve. Mincemeat can all too often weigh its casing down, laced with too much fat and calories already present in the pastry.

Obviously you’d like to eat more than one – Santa certainly would – and removing heavy, claggy element makes doing so more pleasant. There might even be room for three (and a glass of port).

For some great ideas about how to use your mincemeat in different ways, check out my recipes for Mince Pie Cake and Marzipan Mince Pies…

Cost: Using 200ml of whisky in your mincemeat may seem like an extravagance, but we’re not talking about your 30 year old prize single malt here.

Using an off-the-shelf blended whisky, or similar, you could easily produce these 6 jars of delicious Pear and Fig Mincemeat for as little as £8, or little more than £1.30 per jar.

30 replies on “Pear and Fig Mincemeat”

This sounds delicious, I will definitely be making this mincemeat.

Thank you, Cathy. Please do, – it’s simple and delicious.

I really want to give this a go, as I’ve never made fruit mince before. I’m also intrigued by the idea of producing a batch of traditional mincemeat, made with actual mince, as Hugh F-W did in one episode of River Cottage…

I’m intrigued by that, but not sure either. One for next Christmas perhaps. It would certainly cause a stir.

This made me so excited for Christmas! My mister’s English mum makes mincedmeat pies for the holidays 🙂

Then it had the desired effect! There’s a lot of mince pies in England. I’ll be making some soon.

Now I don’t know which one to make~:)

This looks like it needs to be on my holiday table this year! I’m sharing it with my readers, via a link to your blog, in my Life, Inspired column today.

I’m sure this is better than any mincemeat I have ever had — my mother used to make the old-fashioned kind with suet. The pears sound like a lovely addition, not to mention the whiskey.

I like suet mincemeat, but prefer it without. My grandmother always used suet. Nothing like a slosh of whisky!

I love mincemeat and it wouldn’t be Christmas without using it in one form or another. I still have quite a few pears from the trees in our orchard in the basement and this sounds like a terrific way of using some of them.

Yes, that sounds perfect. I hope you give it a try!

Mmm, I love mincemeat, especially with pears! I bet your house smelled amazing!

OH it really did! I can’t wait to get mulling!

That’s all that needs to be said 🙂

This looks gooooood. I just tried mincemeat for the first time last year (my boyfriend is English) and it was the store-bought time because we couldn’t find a simple recipe…this one looks easy peasy. And by the way, thanks for checking out a post on my blog – I appreciate it!

My pleasure! This recipe is SO easy and ready really quickly. Give it a go next year 🙂

Could I make this early and how would one store it ..Thank you

I am 70+ years old and I can still remember my Grandma and Aunts homemade mincemeat. YUM! I have made it many times over the years with green tomatoes, suet and a few times with pears. I have 1 pint left. I may have to give this delicious sounding recipe a try!

How do you preserve it? Canning or freezing?

I just pop it in a jar and then into the fridge!

I’m a bit confused? Is the mixed peel in the ingredients list, candied peel?

Hi I’ve just made this, using port rather than whisky. Smells amazing. Do I need to put the bowl in the fridge while it is maturing.

Sorry for the delay – no need to put it in the fridge, no.

Just going to jar it up, husband can’t wait for me to make the pies! You say keep in fridge, can I keep it just in a cold place? How long is the shelf life if it?

Yes – a cold place is fine. Hard to say about shelf-life, but I wouldn’t be surprised if it lasted 12 months.