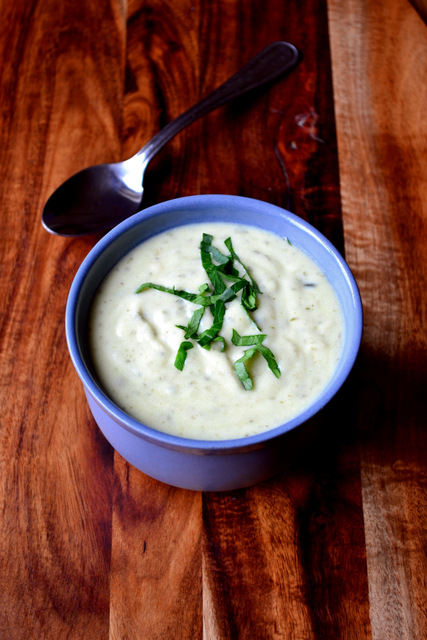 Say it. I know you’re thinking it; Jerusalem artichokes are gorgeous. Knobbly little root vegetables, coloured vibrantly in purple and punctuated with rings of almost pure white, they look like psychedelic ginger. Inside their fancy jackets, however, these “artichokes” are as plain as potatoes in all but one department; taste. Give this Jerusalem Artichoke and Spinach Soup a try and you’ll see exactly what I mean.

One of the reasons I love visiting my local grocers, as opposed to the giant ASDA around the corner, is that you never know what you might find as you stroll through the door. Imagine my delight as I glanced to my left – having just passed a rather tempting squash – to find a box of colourful root vegetables labelled ‘Jerusalem Artichokes – Devon’. 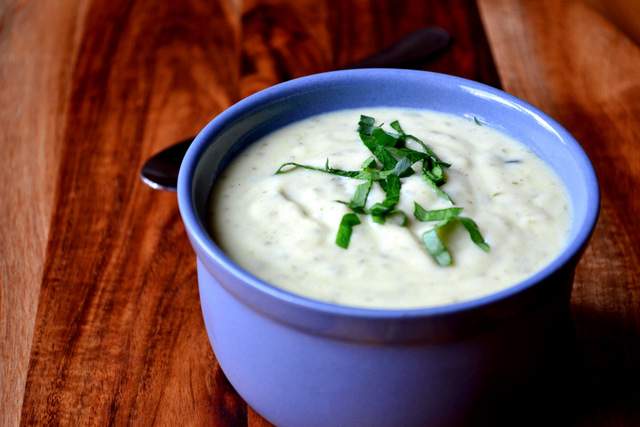 The interesting thing about Jerusalem artichokes? They are entirely erroneous. They have nothing to do with Jerusalem and they certainly aren’t artichokes. An artichoke is a type of thistle; this globe artichoke, for instance. Still, if you can get past the lies then its a tuber worth eating.

In season between October and March, Jerusalem artichokes are one of the more interesting ingredients available over winter. Not exactly widespread, if you do stumble across some – perhaps in a box labelled ‘Devon’ – be sure to pick them up. Regret will not be felt at any level.

Don’t fancy soup? Generally speaking, these “artichokes” can be treated as you would a potato; boil ‘em, mash ‘em… stick ‘em in a stew. Oh, and roast them. They can certainly be roasted.

If you can’t get your hands on Jerusalem artichokes fear not. Soup is something comprehensively covered here on frugalfeeding; just look at my recipes for Broccoli and Pea Soup, Thai Celeriac Soup and Roast Potato and Garlic Soup… 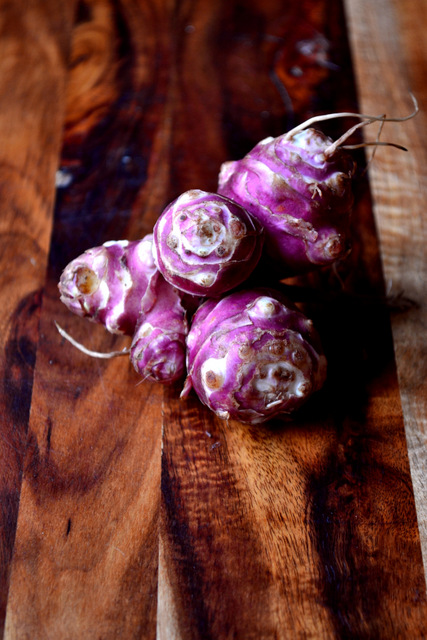 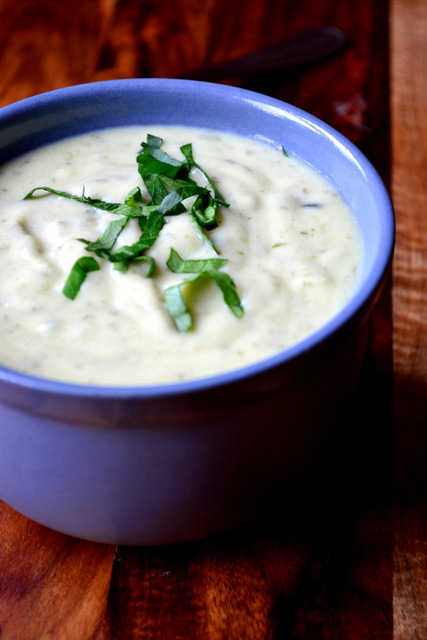 Cost: Though more expensive than potatoes, Jerusalem artichokes can certainly be counted as an inexpensive ingredient. The ones used here came in at around £1.40 per lb, which isn’t too bad.

All ingredients considered, this soup comes in at an economical £3.20; less than £1 per portion. Very filling it is too.

I’m a soup person, so this sounds quite good to me.

I have always found the flavour of these artichokes rather strong, so I like the idea of the potatoes and creme fraiche. I think that “Jerusalem” might perhaps be pardonable as an innocent error, rather than a rampant piece of roguery, having allegedly resulted from a mis-hearing of “girasole” which in Italian describes the plant’s flowers turning towards the sun as it crosses the sky?

They are quite strong. Yes, pardonable indeed, but still worth highlighting :). I hope I wasn’t too scathing; more for effect!

Every time I see Jerusalem artichokes I stop, look and perhaps touch, and move on. I’m curious about them, but when it comes to buying them I think “What will I do with it?” Now I know! I’ll make soup! I love soup.

Fantastic – just treat them like potatoes really! Give them a go.

When I saw this post in my email, I immediately thought… I wanna scoop that up with bread.

Yay – it has had the desired effect 🙂

Crazy – yours are purple! The ones we grow here in Canada are brown on the outside, and look quite a bit like ginger, but a bit smaller – very knobbly and hard to peel. They have great tall stalks of leaves on them so we used to grow them as a privacy blind so my parents didn’t have to look at their neighbours. 🙂

Yes, I’ve seen some that look almost identical to ginger! What a delicious blind!

I would go so far to say that they are up there as one of my FAVOURITE vegetables… Roasted or steamed or in a soup (also a recent discovery of mine), they’re just so damn tasty! And the funny thing is, hardly anyone here Perth (Australia) seems to know what they are – although ours aren’t pretty coloured like yours, rather just like giant knobs of ginger. Thanks for sharing this recipe.

Mine too – they have SO much flavour… I like our purple ones – yours really do just look like ginger :).

[…] is probably the thing I eat most for lunch, ideally with some crusty bread. I loved this recipe for Jerusalem Artichoke and Spinach soup from Frugal Feeding, using local artichokes. It looks rich and comforting and, well, just about […]

I have grown the Jerusalem artichoke but find I have intestinal problems when eating them any suggestions? This year I didn’t harvest until after the frost, some articles suggest waiting till the frost….I haven’t yet tried any. Apparently they are high in inulin and maybe that causes the problem.

Ah that’s a shame (sorry for the late response too). I’m not sure what to suggest unfortunately. Google almost certainly has the answer you crave!