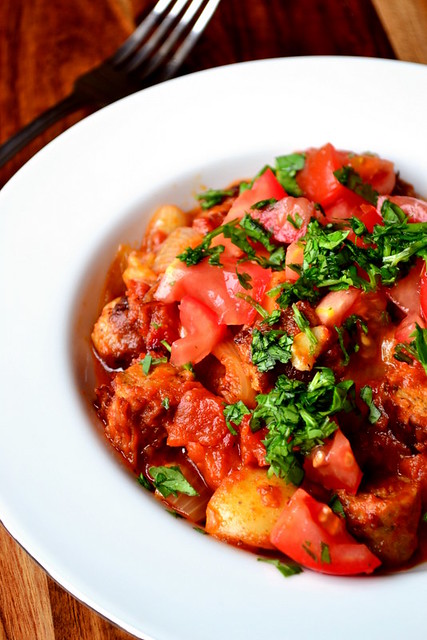 It was difficult to know what to call this dish. A delicious combination of potato hash and shakshuka, with sausage tossed in for good measure, it seemed like ‘Breakfast Hash’ was the only viable option. The best of a bad bunch! Whatever you want to call this recipe, it’s certainly a recipe best suited to breakfast or brunch, served alongside a strong coffee for a spot of Sunday morning recuperation.

This recipe for breakfast hash is so simple that there isn’t much to say about the process itself. The only point worth raising is to ensure your potatoes are nice and crispy; it makes all the difference. A great way to achieve this – and a quick breakfast – would be to use leftover boiled, or even roasted potatoes and crisp them up in oil during the cooking process. It may be difficult to wind up with leftover spuds – they’re just too delicious – but sometimes it’s worth the effort. 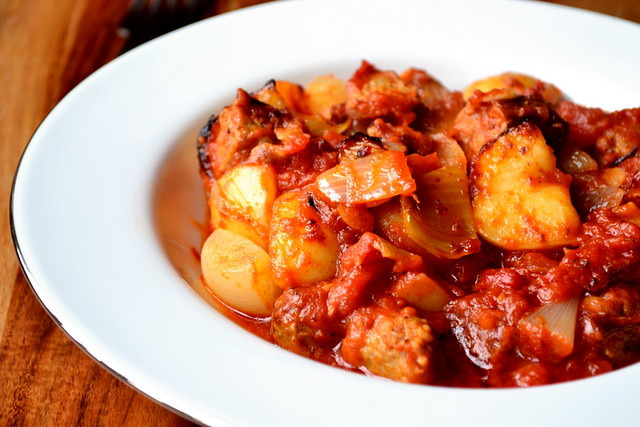 Feel like adding a little more breakfast to your hash? Crack an egg or two into the pan just before you pop it in the oven. Skip the freshly chopped tomatoes and what you essentially have is a simple shakshuka with a few extras thrown in for good measure. What ever way you decide to enjoy your breakfast hash, it’s too simple, quick and delicious to ignore and will certainly set you up well for the day ahead, no matter how bad it’s been so far! 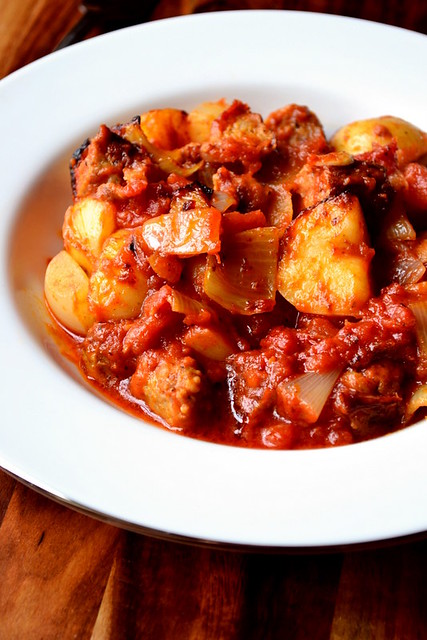 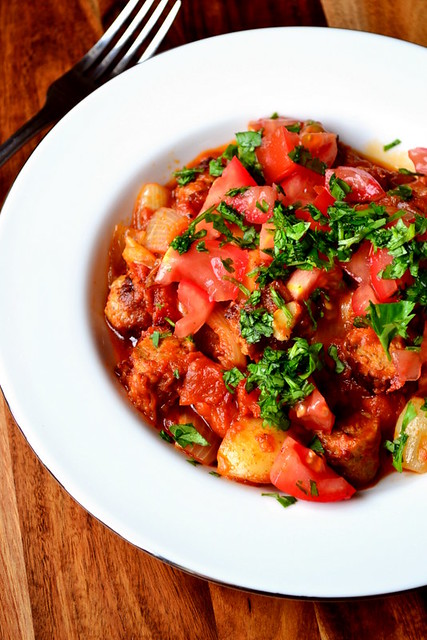 Cost: I suppose the only “expensive” ingredients here are the sausages, but even they can be found for a relatively cheap sum down your local butchers. Indeed, the entire breakfast/brunch hash can be prepared for as little as £2, but the price largely depends on the quality of your sausages. For a twist you could even spice things up with sausages of the merguez variety!

Another deliciously photographed one Frugal. I wish I had that right now.

Thank you very much, Rosemary!

This would make a very good change from my usual muesli. Lovely, bright photos

Indeed it would. I’ve gone off the muesli of late.

I would like to enjoy this hash on a slow weekend morning with two or three cups of coffee and a good book. Heavenly!

WOW! This looks really good. I’m going to have to try this soon. Thanks!

Thank you – I love hash, it’s just so simple!

Yum, this looks great 🙂 I also rarely have leftover potatoes because they are delicious, but I’ve started baking potatoes in the microwave to use in dishes like this 🙂

[…] 5) Breakfast Hash by Frugal Feeding. An indulgent breakfast/brunch but it looks SO good. […]

I agree, this is the perfect way to start your day! I love good hash!

OH me too; so simple as well.

Yum! I can’t wait to try this one. Thanks for visiting my blog, too. 🙂

My pleasure. Thanks for commenting back 🙂

Hi how long do you need to bake the egg for?

Until cooked – I know that’s not particularly helpful, so at a guess 5-10 minutes.