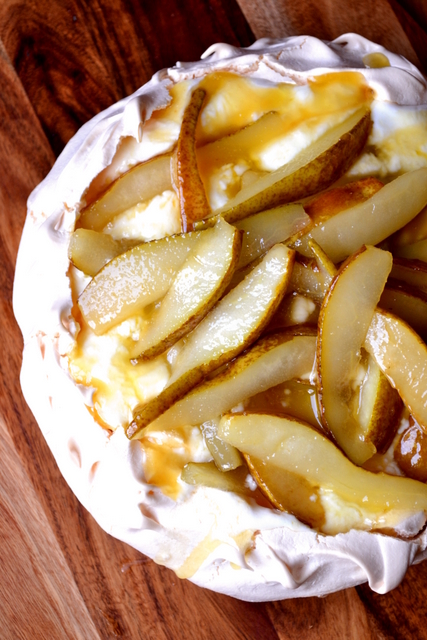 Dedication to the fight against food waste – an integral part of frugality – often requires a little thought and preparation (for more info see my tips page). When you make custard, for instance, it isn’t acceptable simply to throw the egg whites away. What a waste! Instead, whip them up into a fuss, bake them and drench liberally with indulgent greek yoghurt and sumptuous caramelised pears.

I’m going to be frank. Caramelised pear pavlova may look exquisite when whole, but slice into it and anything remotely aesthetic goes bodily through the window. But this is defenestration at its best. Who said you shouldn’t love a messy dessert? Pudding should be pure, unbridled delight, no matter what that looks like in practice. It’s all the fault of the Greek yoghurt anyway…

Though pavlova does take a while to put together, you spend very little time and effort actually doing anything. Don’t be deceived, caramelised pear pavlova is a smashing dinner party dessert; a high maintenance recipe it is not. Not only does it look the part, you can bung it in the oven in the morning, remove it in the afternoon and decorate it just before it needs to be at the table.

Remember not to throw away your egg yolks, make my Pear and Custard Pudding instead! 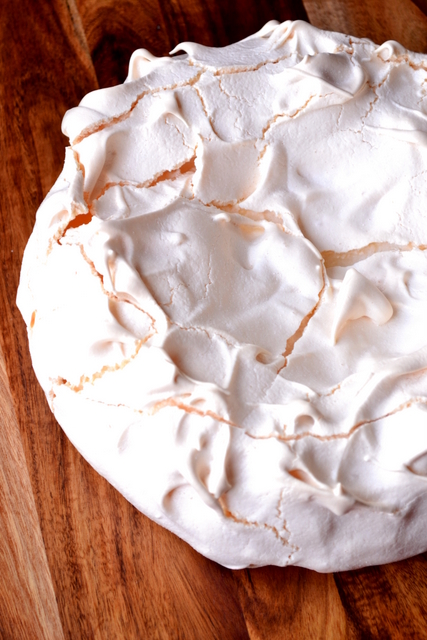 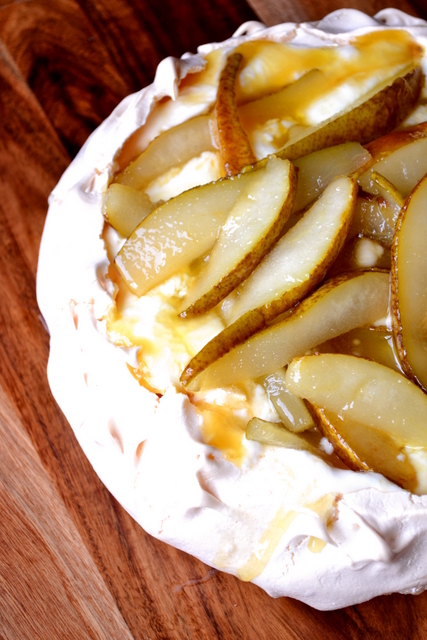 Cost: Though the recipe may seem daunting and complex, it’s actually relatively simple. And you know what simplicity tends to mean; frugality! Indeed, this delightful pavlova – a pudding for 6 – should set you back no more than £2.20. That price actually took me by surprise…

Pavlova is one of my favorite desserts but I’ve never made it. Will give this a try shortly.

Please do – it’s a yummy dessert!

oh yum, I will definitely make some custard just to have left over egg whites. Thanks!

Haha – not really the idea, but I like your style nonetheless.

Oh my goodness, this looks SO good.

Thank you, Nicola! It was 🙂

Me too! Just bung it all in and enjoy.

Looks absolutely delicious. Meringues are among my favorites. And I love that you used the word defenestration!

It’s a good word, one of the very best.

I reminded myself of that – I don’t know what I don’t!

Fabulous, as always Nick! I definitely need to make a pavlova this summer 🙂

Thank you, Korena – you must, a classic summer pud!

[…] This post by Frugal Feeding. Anything with caramel in the title is going to be good. This looks so […]

I drooled a little bit when I saw the picture. Meringue is my go-to response to leftover egg white so Pavlova is a favourite. Also I totally agree that it doesn’t matter what it looks like when you serve it — it’s the taste that counts!

This really was drool-worthy – I so enjoyed eating it. Big bowls of delicious mess!