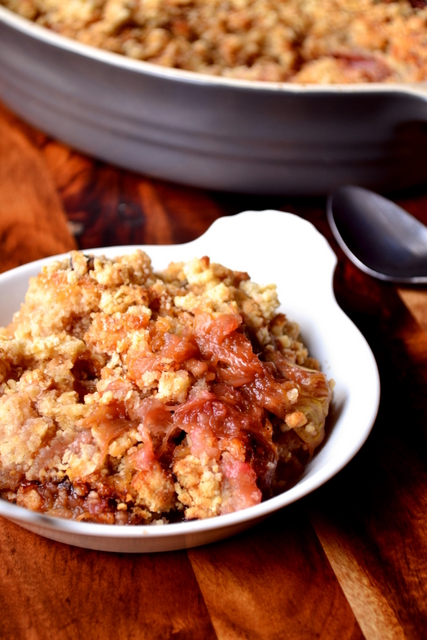 Rhubarb Crumble is a great early-year British pudding. Quick and easy to make, this foolproof recipe makes use of a fantastic vegetable when there is very little fruit to be had. As a result, though the topping is much the same as it always is, the filling is ever so slightly bitter – a marginally different beast from the crumbles of summer and autumn.

Often, crumble in any of its varied forms is just that little bit too watery. It’s always a shame when you break through a layer of crisp, buttery topping to reveal a puddle of juice littered with chunks of slightly undercooked fruit or vegetable.

Unless we’re talking about apples, water shouldn’t be added to a crumble and, even then, alcohol is much the better option. Instead, the insides of a perfect crumble – particularly a rhubarb crumble – should be juicy and moist, but in a rich, lightly thickened manner 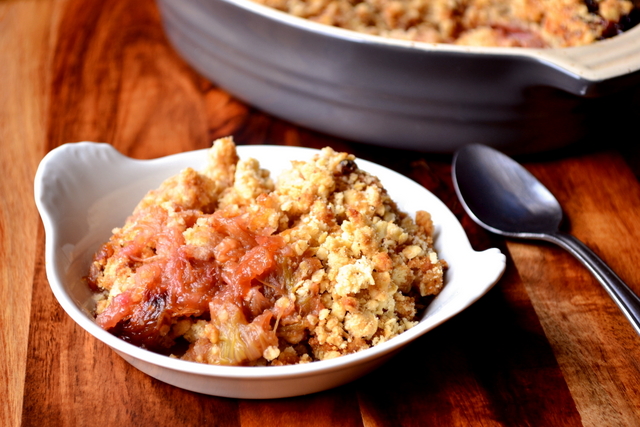 Served up with a generous portion of real custard, this rosy recipe for rhubarb crumble is a wonderfully comforting follow up to a lazy Sunday afternoon roast. Of course, if you’re seeing this recipe in the autumn rhubarb will no longer be in season. What you need is a recipe for Blackberry and Apple Crumble – another true classic! 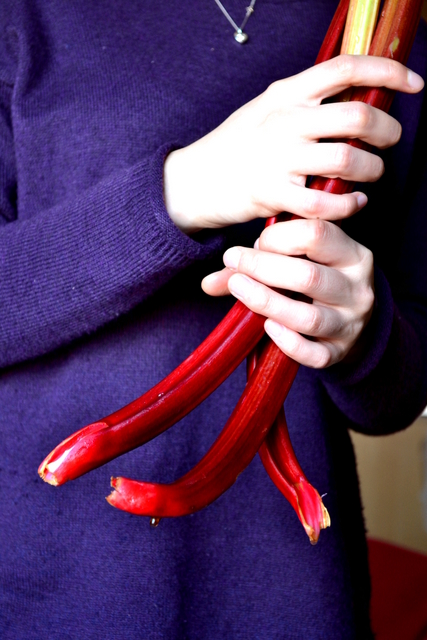 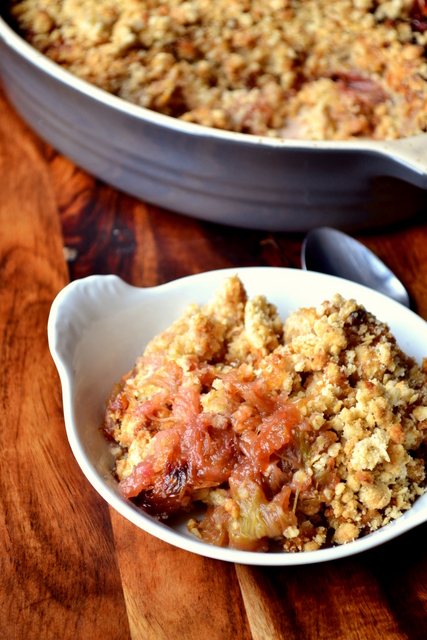 Cost: Rhubarb is an impressively inexpensive ingredient, particularly in the first few months of the year. Available for as little as £1/500g, this entire pudding for 4 should set you back no more than £2.10.

Rhubarb crumble is one of my favourites. My dad likes to put dates in too but am still undecided as to whether they should be there!

Rhubarb just started appearing at our grocery store again recently, and I’ve been searching for an excuse to buy some. This looks delicious!

Perfect. Our rhubarb is coming up now. 🙂

Lucky you – I’ve really loved it so far this year.

It’s a perennial so plunk it in and get some every year. Though last year it didn’t do very well, it was a tough year for the garden. Fingers crossed it will be back to normal this year!

I just need the room… Can’t wait to have a garden!

I hope you are able to get one soon. That helps with being frugal.

Rhubarb crumble is one of my absolute favourites! I add in ginger and lemon zest for an added kick. Truly delicious!

Good idea – rhubarb and ginger is awesome, as per my jam recipe!

Looks and sounds delicious. Sadly our rhubarb crowns have died off, so we’ll have to look out for some at the markets! 🙂

Ah, that’s a shame, though I’m sure you’ll easily find some!

Looks so inviting! I wish rhubarb was more easily available in India. I only seem to find it on restaurant dessert menus. I have another query, if you don’t mind answering- what camera do you use? Your photos are getting more beautiful with each post!!

That’s a shame. I use a Nikon D3100 DSLR with a basic kit lens set at 55mm – then I edit the photos to improve contrast and colour. I’m glad you like my photography.

Thanks! Have been wanting to invest in a DSLR myself. I have been following you for 2+ years now so can see how the pics have just transformed! Was lovely reading the Guardian piece as well. Keep cooking, baking and picture-taking!!

Yes, I’ve certainly become a far better photographer! I’ll be carrying on well into the future 🙂

[…] with homemade egg custard? Pour it – generously – over all manner of puddings including rhubarb crumble, blackberry and apple crumble and syrup sponge […]

[…] isn’t my first foray into crumble. Check out my blackberry and apple rendition and ginger and rhubarb concoction. There’s even a crumble […]