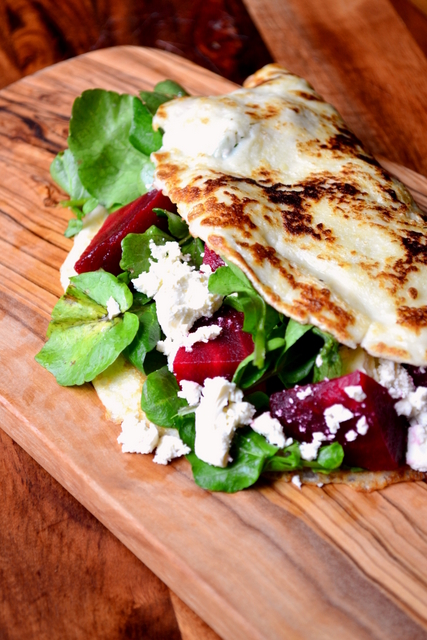 Though neither savoury or sweet, pancakes are generally filled or topped with sweet ingredients. Lemon and sugar, maple syrup, blueberry jam; the list of sweet pancake toppings is endless. Despite this, pancakes lend themselves favourably to savoury pancake fillings like beetroot and feta with just a smattering of fresh British watercress.

Making savoury pancakes is much the same making any other sort of pancake. The batter mixture is no different, making them the ideal blank canvas for all sorts of flavour. Channelling a little trans-European inspiration, these Feta and Beetroot Pancakes are unsurprisingly robust in taste. The sharp feta combines well with the earthy beetroot and peppery notes afforded by a smattering of watercress. 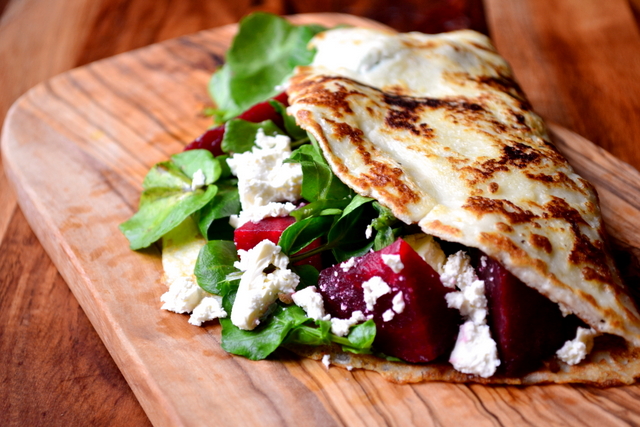 If there’s one rule by which to abide when making pancakes, particularly British pancakes or crepes, it’s not to turn them too early. Always give them a full 30 seconds on either side, or your pancakes will stick or fall apart. Be careful when flipping too, using the thinnest utensil in your possession. If your “flipper” is too thick the edges of your pancakes could find themselves unceremoniously damaged.

Quick and simple to prepare, savoury pancakes make perfect light lunches. For a meaty alternative, give my recipe for Merguez and Spinach Sourdough Pancakes a try. You could also replace the British pancakes in this recipe with a sourdough batch, if you have a little excess starter to hand. 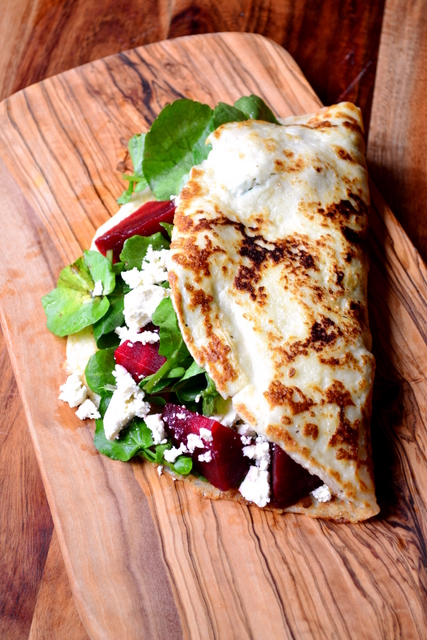 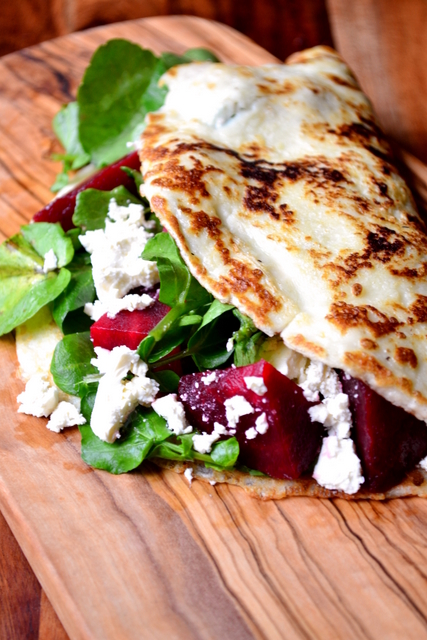 Cost: As you’re probably aware, the main expense with this recipe comes from the filling. While beetroot and feta are relatively inexpensive, good-quality watercress is a little dearer. Happily, a £1.50 bunch of watercress also goes a long way as a result of its peppery flavour.

Despite the expense of watercress, this delicious lunch for four should set you back no more than £2.

13 replies on “Beetroot and Feta Pancakes”

I was just thinking about beets.

Then you must take action.

I did. Beet tiramisu 🙂

What wonderful pancakes. Love the filling.

Beet root and feta – such a great combination. New to your blog. Really love the design. Have signed up for more …

Thank you! Glad you like what I’m doing here. Hope to hear about the recipes you try 🙂

wow! love this simplicity of this dish and it sounds delicious. I’m definitely making this one at home. Thanks for sharing such a great recipe

Thank you, Fang. My pleasure.

This looks so easy and yummy!! I can’t wait to try it 🙂 Thank you for sharing this.

Just made and eaten these. So quick and easy, totally delicious, the flavours work really well together. I happen to be allergic to olive oil, but a dash of really good quality rape seed oil works just as well!

Allergic to olive oil?! That’s a curse I couldn’t live with. Still, Rapeseed is nice! So glad you enjoyed my pancakes 🙂