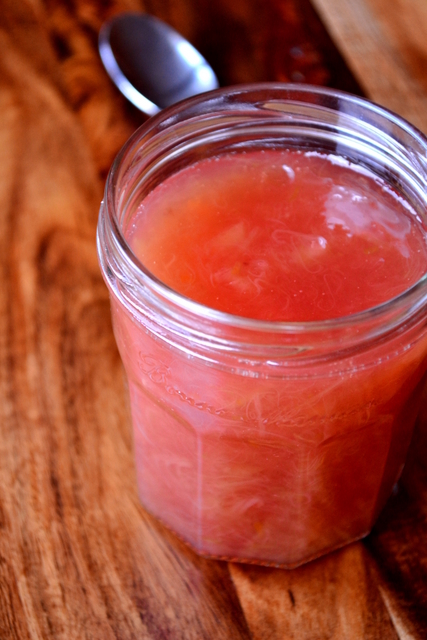 Running from January all the way through to the end of April the Yorkshire forced rhubarb season is one of the best things about food in the first few months of the year. More delicate and slightly sweeter than the main crop, forced rhubarb is the perfect candidate for my rhubarb and ginger jam recipe.

As with any shop that deals directly with food, my local grocer has to deal with a certain amount of food waste. Where they are different to supermarkets, however, is that they’ll try their hardest to not let anything go to waste.

Stock at most grocers doesn’t come with a sell-by-date, which means the food system abides by common sense; if it’s mouldy or rotten, it’s no good. Whereas, at the supermarket if time has moved beyond an arbitrary date, perfectly good produce is made redundant.

Take the Yorkshire forced rhubarb used in this recipe for rhubarb and ginger jam as a case in point; it was a little soft, arguably past its best, but perfectly good for preserving. My grocer, realising the rhubarb was a little too “bendy” had cut it up into a 500g tub and slapped a £1 sign on it. An absolute steal – please enjoy it as much as I did.

To see what I did with this batch of jam, check out my recipe for Rhubarb and Ginger Jam Cake; it’s a good one. 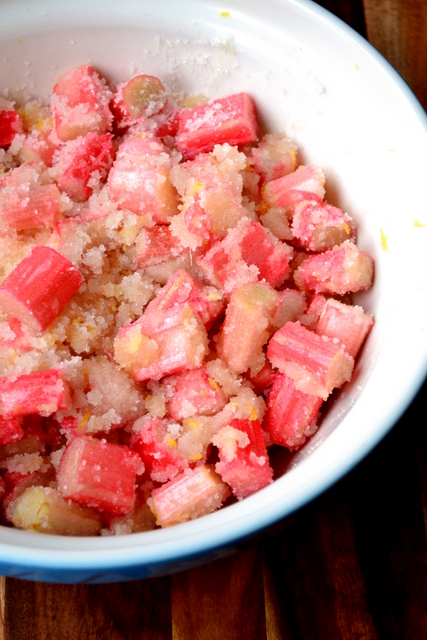 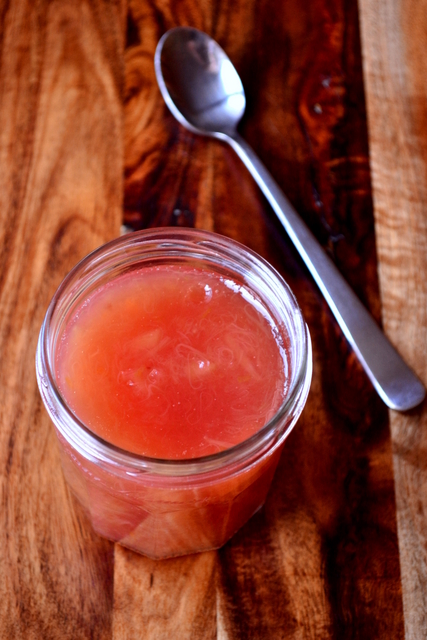 Cost: If you’re lucky enough to chance upon some Yorkshire forced rhubarb that has been reduced in price, clutch it with both hands and never let go. If it hasn’t been reduced, buy it anyway.

Even without assuming you have stumbled across some cut-price rhubarb, these three jars of unbelievably delicious jam will set you back around £2.80. That’s roughly the amount one jar of a similar preserve would cost elsewhere, if not cheaper.

55 replies on “Rhubarb and Ginger Jam”

I have to make this .. whatever the cost!

Well, lucky for you it won’t be very much…

Got some! And it was reduced …

The other day, I picked up a jar of this and put it back because it was so expensive and was not sure if I would use it all. This is perfect to try!! Thanks!

I hope you do! It’s great on toast, with yoghurt and even baked into a cake (as you’ll see next week).

I love the way the colour has stayed so pink! Looks gorgeous 🙂

Beautiful color, never have had rhubarb before, not even with strawberries. Great shopping tips.

Give it a try, it’s a wonderful vegetable.

Thank you, Rosemary – are you a preserver?

Would this be quite liquid-y? Would some pectin help to make it more solid and spreadable?

Not at all – jam sugar contains added pectin. It was beautifully set.

What beautiful color (oops, colour)! Rhubarb is hard to come by here. I don’t know why. And, when I do find it, it’s usually a more green variety. But if I ever find a bunch of the pretty stuff, I’ll definitely try this.

Good correction :D. This stuff is pinker because it’s forced. Normal crop rhubarb tends to be greener, which isn’t really a problem, but it is more tart.

Oh lovely! I just bought some rhubarb from my own grocery and hadn’t decided yet what to do with it. Ginger sounds like a perfect flavor combination for it – spicy and tart together. Maybe slathered on biscuits or scones?

Great! This is a great use. Yes, it’s delicious slathered on anything and everything. Nice with yoghurt too.

Great minds! I’m sitting eating some my mum just made and its delicious!

Have got mounds of my very own Yorkshire rhubarb (not even forced) – look forward to trying this recipe when I get back off my hols!

Fantastic – please do and let me know how it turns out.

what is the difference between root ginger and stem ginger? my grocers only have “ginger” (which appears to be the root of the plant)

Kind of what it says on the tin. Stem ginger is usually packaged in syrup and won’t be in the fruit and veg section of a supermarket/grocer.

I still haven’t managed to make rhubarb jam without turning it into a rhubarb caramel (and not in a good way!). My stock of last year’s jams is nearly all gone, time to get some rhubarb!

That’s a shame – what do you think goes wrong? I need to start making jam so we have it on stock.

I think I have left it to cook for far too long and then only remembered afterwards that it didn’t need anywhere as long as my recipe was telling me. If only I had a decent memory!!!

Just made it after a trip to the allotment earlier today. Delicious 🙂

I was wonder what you meant by sealing the jar? The recipes that I have tried before require a hot water bath to seal it. Does this one as well?

No, you can sterilise it any way you like, in the oven, water bath or just by pouring boiling water over the jars. Sealing just meant closing the lids 😀

Thanks. I wondered if it meant that I need to boil the jar for 5 to 10 minutes. I made a marmelade last year and the recipe said I had to boil the filled jar to seal it. I wanted to make sure I did it right. I have frozen rhubarb from last year and I wanted to try your recipe with it. I followed another blog and they said you could use last years rhubarb in jellies, jams and marmelades. That way you didn’t waste it. I was worried about freezer burn. The lady said she often does this. Thanks again your recipes sound delicious.
Honey
Honey

No, just a few minutes in boiling conditions should do the trick! After about 75C. Anyway, I hope all turns out ok – I wouldn’t worry too much about freezer burn with this sort of thing.

I am so wanting to do this recipe. Thank you so much for posting it.
Honey

My pleasure – I hope you enjoy it.

What a steal! Awesome.

Thank you – it was delicious – just finishing it off now.

[…] course, it’s not only rhubarb and ginger jam that works well in a cake like this – most homemade sweet preserves will work. My only advice […]

[…] to serve these beautiful British scones with a spot of jam? Check out my recipes for Rhubarb and Ginger Jam and Damson […]

I have scum – should I remove it?

Sorry I didn’t get back to you straight away. Usually it’s best to remove the scum (I didn’t get any when I made it), but it’s perfectly edible.

Thanks. I added about 1 oz of grated fresh ginger but it’s too mild for me. Should I just add more or maybe not add till near the end of the boil? I’m not keen on stem ginger.

I’m afraid I can’t advise, the flavour of stem and root ginger are so different!

[…] I hate to throw away any food but it really has been inedible. But this year, inspired by Frugal Feeding’s rhubarb and ginger jam post, I thought I would give it another […]

can the jars be sterilised in the microwave oven?

As long as they’re heated to 100C it’s fine. Don’t put metal lids in though!

[…] the relative youth of the year, I’ve already made Strawberry Jam using British strawberries and Rhubarb and Ginger Jam using some quality Yorkshire forced. Once you get the knack and a feel for how much sugar you need […]

[…] see my favourite preserves of the year so far, check out my recipes for Rhubarb and Ginger Jam, Strawberry Jam and Apricot […]

[…] Try popping along to your local food or farmers market; you’ll usually find a wide array of interestingly flavoured preserves, which would be perfect for a treat like […]

My quest is to find ways to add ginger to my meals. A great rhubarb/ginger jam. I love the colour. Sensational! You have so many interesting recipes. I’m speechless!

Thank you – this is probably my favourite jam recipe actually 🙂

My Mum who was born in Yorkshire and is 93 thought this was lovely, thank you.