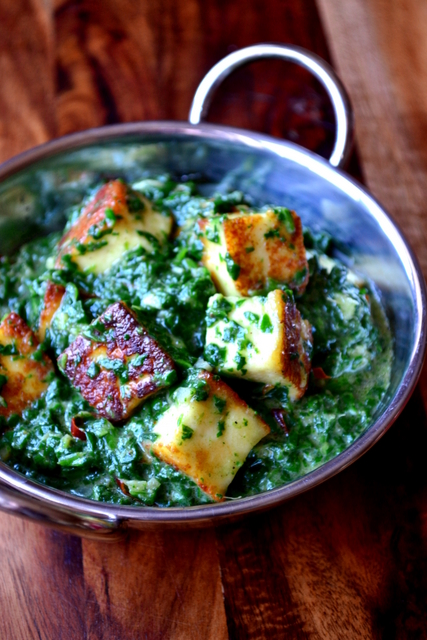 As a country that’s between 20% and 40% vegetarian, it’s unsurprising that India has a wide selection of vegetarian food to choose from. Paneer cheese is a particularly widespread alternative to meat, actively used across South Asian cuisine. Saag Paneer is a classic North Indian dish, which like mutter paneer has made its way firmly onto our plates in the West.

It’s not difficult to see why saag paneer is so universally popular. Though not graced with masses of flavour, paneer is a rich and creamy cheese. As a result it carries flavour beautifully, adding an aspect of luxury to its culinary host.

In Britain ‘saag’ is synonymous with spinach. They are inseparable terms. This isn’t the case in India. If you can lay your hands on some mustard or beetroot greens, for instance, get them in there. Doing so will give your saag paneer recipe a different, unique flavour you’ll not forget in a hurry. 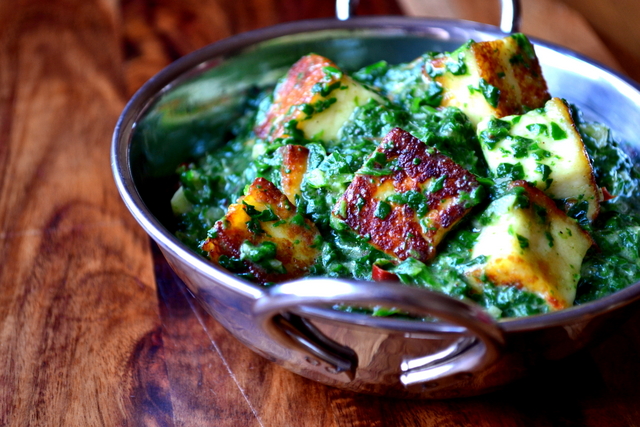 Of course, if a vegetarian curry isn’t quite what you’re looking for, my recipe for Lamb Badam Pasanda is a delicious and simple alternative and it could even be served alongside your saag paneer. 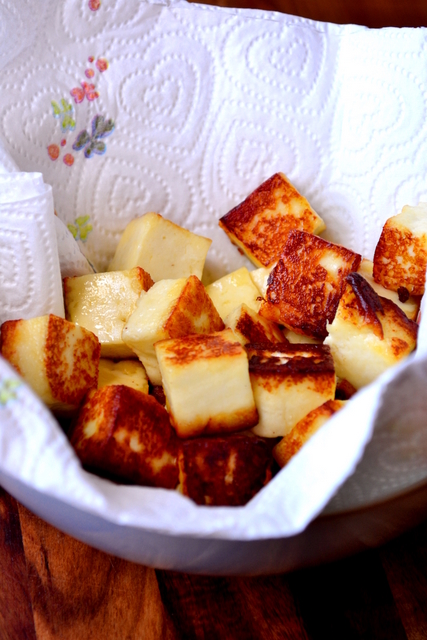 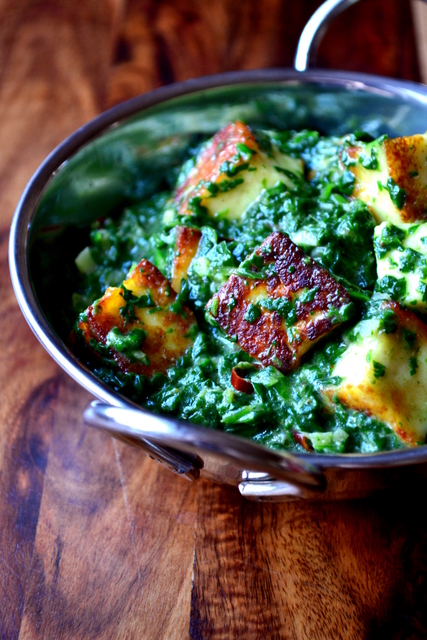 Cost: Paneer is a delicious, creamy ingredient, which makes a frugal alternative to chicken or beef. Spinach is available fresh and cheap year round. As such, this recipe for saag paneer should set you back no more than £3.50. Less than £1 per portion.

We are clearly on the same wavelength this week lol! I love me a bit of saag – the canned mustard greens are the way to go I believe according to my friend’s adopted Indian aunty.

I’ll have to keep an eye our for the tinned mustard greens. Any ideas?

I tried saag paneer for the first time last year and was absolutely amazed by it, but it’s never occurred to me to make it myself! thanks for sharing!

Whenever I come to your blog, I feel smarter. No lie.

I hope that’s a good thing 😀 – I’ll endeavour to keep the facts coming.

We had marvelous saag paneer in an Indian restaurant in Bangladesh. Nice picture.

I wish I could travel as much as you have, Rosemary.

If you want to, you will.

Can you use frozen spinach for this?

Beautiful curry and recipe, one of my favourites, thanks for sharing. Lovely photo.
Cheers
Marcus

I shall be including this on my menu for the coming week. I bought a bunch of beetroot at Frome Independent Marrket today, so guess where the leaves will be heading!

Ah. Frome! I did the Lionheart sportive from Longleat the other week. It’s a great part of the world.

It’s a fantastic ingredient. I’ll post a recipe about how to make it soon.

Love a bit of grilled cheese and this looks amazing!

Thank you, though it is a bit naughty.

This is one of my most favorite dishes!! Thank you for giving the Steps 🙂

My pleasure, I hope you try it out.

I’ve been wanting to make saag paneer for a while now! This looks so good.

I insist you give it a whirl, Korena 😀

Any ideas for paneer substitutes? I know that I can’t get it where I live. Would tofu work?

I think tofu would be fine, yes. But be very careful if using tofu as it’s more likely to crumble.

Lovely indeed Nick. I need to eat more of this sort of food.

I love how simple and tasty this delicious recipe is. I often eat it, but have yet to make it. Thanks for showing how straightforward this recipe is 🙂

Thank you, yes, it’s very simple! You should try it.

Hi there. I just came across your blog because of a Guardian article on leftover bread that you had retweeted (thank you for that). What a gorgeous blog – I love discovering new (to me) people doing beautiful things with food. Sag paneer is one of my favourite dishes – love the recipe. The photo is absolutely mesmerising – fabulous!

My pleasure! Glad you like my blog – hope to see a few comments from you perhaps 🙂

This looks amazing! Love saag paneer, thank you for sharing!

Thank you – me too, it’s a wonderful dish.

This looks lovely. What’s better than creamy spinach and cheese!?