Cheesecake, in general, has long been a favourite of mine. From Ginger Nut Cheesecake to Blackberry Cheesecake and no matter how you make it, cheesecakes always have an inimitable feeling of silken luxury at the very apex of indulgence. Sometimes, however, cheesecake recipes can seem a little over-complicated, when really they should be the height of simplicity. Indeed, the inspiration behind this recipe for Cherry Cheesecake Pudding is directly related to my yearning for something simpler. It features only five ingredients.

When making cheesecake I have always used digestive biscuits (except the one with my delicious Ginger Nuts). They are slightly sweet and make for a malleable base, so have never come under scrutiny – “why fix what ain’t broke”? However, as my tastes have developed it has occurred to me that salt goes an awfully long way, even where dessert is concerned – enter the oatcake. Oatcakes are, generally speaking, more savoury than digestive biscuits and possess a rougher texture. Whereas digestives seem to be almost at one with a cheesecake, oatcakes stick out like the proverbial sore thumb. I like that. Consequently, there are two distinct elements to this pudding; creamy, cherry flavoured cheese and coarse, salty oats. Instead of coming together into one sweet mass, they support one another, developing and improving flavour. This is cheesecake as it was always intended to be. 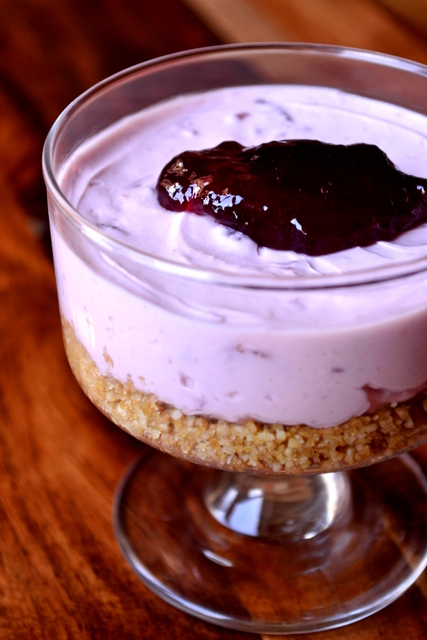 Cost: Though these Cherry Cheesecake Puddings are on the indulgent side and sure to satisfy even the sweetest of teeth, the paltry number of ingredients required to make them ensures their cost remains low. Indeed, at £2 for four, or 50p a pud, it’s difficult to resist their charm.

I’ve never had an oatcake but want to taste one. Very pretty Frugal and simple.

You must – I intend to put up a recipe for them this week or next if I get a chance to bake!

These are wonderful. So simple but I’m sure very delicious!

What would soft cheese equate to in the US? Is that like cream cheese?

I love cheesecake way too much. I think this serving size is way safer for me than a whole cake 😛

Yes, it is for me too – I can guzzle cheesecake like there’s no tomorrow.

Thank you – I’m a big fan of simplicity 😀

omg this sounds amazing with the oatcakes and the mascarpone!

They work very, very well together!

Another great recipe! cheesecake is the boyfriend’s favourite so will definitely have to give these a go! Never thought to use oatcakes in a pud before 🙂

I love everything about this. Just pinned.

Lovely recipe, and cherry jam is one of my favourites!
I often use oatcakes with white chocolate cheesecake as they provide a perfect salty savoury contrast t the chocolate’s sweetness.
I’m mildly concerned that this dish is so quick and easy I could end up making it far too many times!

Mine too and I’m not usually much of a jam man… Don’t be concerned. Embrace it!

[…] possess a really delicious flavour. Oatcakes are also incredibly versatile and work as well in a cheesecake as they do layered with cheese and […]