Sometimes it’s difficult to describe some dishes as having a particular recipe. As with the Ploughman’s Lunch, a firm British favourite, these toasties are more of an assembly job. Still, I’ve never felt that there’s anything wrong with writing about interesting combinations and slightly more gastro versions of classics. Food is as much about ideas as it is about skill and complexity. So, for simplicity I’ll go on describing this ‘assemblage’ as a ‘recipe’. These Ploughman’s Toasties do, after all, make for a rather wonderful lunch, particularly if you’re in a bit of a pickle.

The key components of the classic British Ploughman’s Lunch are bread, cheese and pickle (or chutney). The ingredients you generally might find added to the Ploughman’s staples include cold meats – particularly ham – apples, pickled onions, tomatoes and a pint of refreshing beer* (though this tends to be served alongside and in a glass). 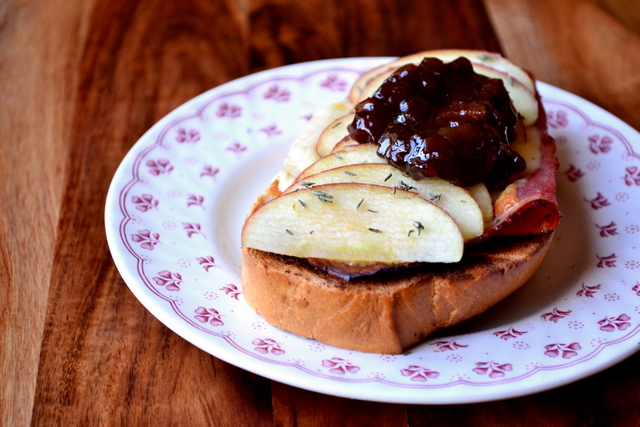 With this recipe I’ve attempted to channel as much of this as seems reasonably sensible from a culinary perspective. What results are two Ploughman’s Toasties packed with quality, flavourful ingredients that are unlikely to disappoint. The thyme, though not particularly common where Ploughman’s Lunch is concerned, really is the most important part of my recipe. It just gives the whole lunch a huge lift that certainly should not be missed.

* I regret to say that no pints were consumed alongside these particular toasties. 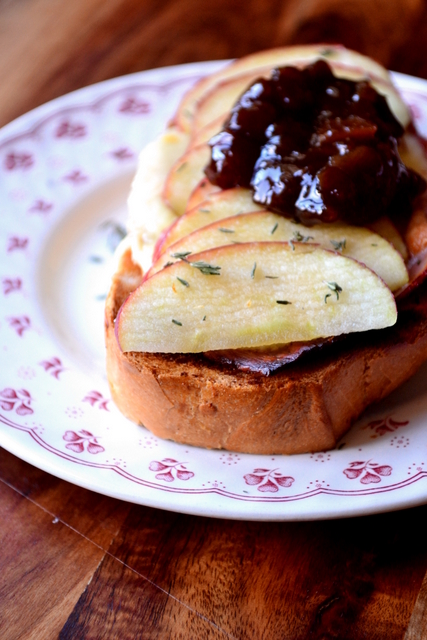 Cost: Despite using a number of good-quality ingredients, these Ploughman’s Toasties can be made for relatively little money. A bit of locally sourced cheese and ham goes a long way, and two toasties should set you back no more than £1.80.

It has all of my favorite elements! How can you go wrong with that?

It looks delish! I don’t eat pork, but I’d do something similar with beef, perhaps.

Yes, beef would work, or perhaps lamb or chicken.

yum! I love chutney with cheese, its such a simple combo that when done right is absolutely magic.

Exactly and this was just right 😀

[big smile!] Well this must be the ‘politest’ and most elegant ploughman’s lunch I have ever witnessed in some three decades of visits Down Under > UK!! Usually surely just a chunk of bread, a hearty cheese, a pickle AND the beer does come first 🙂 ! A strong dark beer methinks!!!

Very polite indeed, but also indulgent and delicious! I would have enjoyed a beer with it…

After all, there’s a reason why they’re classic.

I read many books by British authors and of course the Ploughman’s Lunch comes up frequently. I have an idea of what it is, but it’s great to have your recipe to go by. Thanks!

My pleasure – it really is a great lunch.

Wow! that looks amazing. You can never get bored of the apple and cheese combo! Too good.

What a lovely lunch. Though a pint might have been a nice addition. 🙂

Yep – it definitely would have been 🙂

Oh my goodness this looks incredible!

Thanks – really delicious and light.

These recipes intrigue me and I’ve already chosen 3 to try out. Thank you!
Franny.

Great! I hope you enjoy them!

[…] more lunch ideas, why not read my recipes for Ploughman’s Toasties, Bacon Topped Avocado on Toast and Open Stuffed Mushroom […]